Despite repeated warnings from the WHO that emerging nations should be given priority access to the mRNA vaccines produced by Moderna and Pfizer, American authorities are looking at potentially authorizing a second doses for at least some patients as they further consider whether to recommend annual boosters.

The planning is still in its early stages, and authorization would ultimately depend on ongoing studies establishing that a fourth dose would shore up people’s molecular defenses, which have waned after their first booster and reduced their risk of symptomatic and severe disease.

Among the issues that need to be resolved, according to WSJ’s source, are whether the second booster dose should be authorized for all adults or particular age groups, and whether it should target the omicron variant specifically, or be formulated differently. 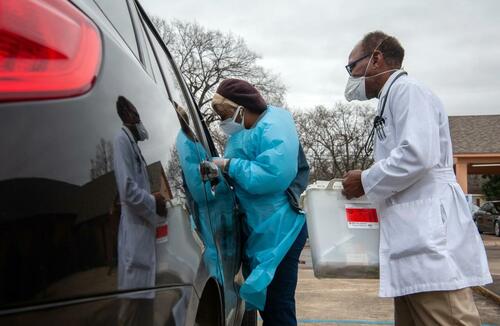 Whether the fourth booster could ultimately be the start of annual COVID vaccinations is also under consideration; no decision is final, and it could be necessary to make booster shots available earlier if a more dangerous, elusive variant were to emerge.

Offering a second booster dose, one of the people said, may make sense in the fall because many people get their annual flu shots then and so might be more receptive to getting vaccinations. Potential obstacles to the second booster effort are that many people are fatigued with vaccinations after getting initial doses and that others are reluctant to get the shots.

About 65% of the American population is fully vaccinated, meaning they have gotten two doses of the vaccine from either Moderna or Pfizer-BioNTech, or one dose of J&J’s shot.

About 43% of fully vaccinated people have gotten a booster shot. After research found that COVID vaccines’ protection sags over time, health authorities began urging people to get a first extra dose. Studies have shown the booster can strengthen immune defenses that have weakened months after initial vaccination.

Research shows that the protection offered from booster jabs starts to deteriorate within a few months after administration. As one study showed, protection against the omicron variant started to wane after just 10 weeks, with protection dropping by as much as 25%.

CEOs like Pfizer’s Albert Bourla have already been laying the groundwork for boosters to be given annually, as he has said in interviews.