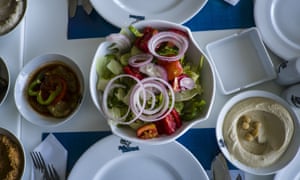 Nuts To Statins: Mediterranean Diet Better For Your Heart Than Pricy, Ocnrtoversial Statins

If you are facing heart problems and wondering if there’s anything you can do to stave off the Grim Reaper a while longer, you might want to consider trading in that statin prescription for a nice plate full of fish and vegetables.

A new study has found that for people already suffering from heart problems, a Mediterranean style diet–one rich in vegetables, nuts, fish and leaning more on olive oil than butter–can reduce their chances of an early death by 37 percent.

It should be emphasized that this study compared samples of people who ate the aforementioned Mediterranean diet versus people who are a more western diet, heavy on beef and reliant more on butter.

And while previous studies have looked mostly at healthy people, this study’s researchers were curious about what happens when someone already suffering from some health problems due to heart disease was switched to a Mediterranean diet.

“So far research has focused on the general population, which is mainly composed of healthy people,” said Professor Giovanni de Gaetano. “What happens to people who have already suffered from cardiovascular disease? Is the Mediterranean diet optimal for them too?”

The study looked at over 1,200 people who had a history of heart attacks, blocked arteries, and strokes and followed them for a period of seven years. Over the course of the study period, 208 participants died. But what de Gaetano and others discovered after adjusting for age, gender, class, exercise and other habits was that the closer people were to sticking with the Mediterranean diet, the less likely were their chances of being struck down early.

And although statins are among the most widely prescribed drugs out there–sold under the brand names Lipitor, Zocor and others–the cholesterol-lowering medications are increasingly under scrutiny. The FDA warns that even with monitoring of liver enzymes, there is no way to predict when or if these drugs may cause serious liver injury. People taking them are also subject to cognitive impairment, including memory loss, confusion, and forgetfulness, as well as type 2 diabetes and muscle damage.

Or as Sir David Nicholson, former chief executive of the U.K.’s National Health Service said on the news that he recently quit taking statins and instead is eating a Mediterranean diet, “If a lifestyle change works then why would you take the statin? The trouble is that they give you a statin straightaway, so you don’t know what is working.”
###
https://www.theguardian.com/society/2016/aug/29/mediterranean-diet-better-than-statins-for-tackling-heart-disease-study