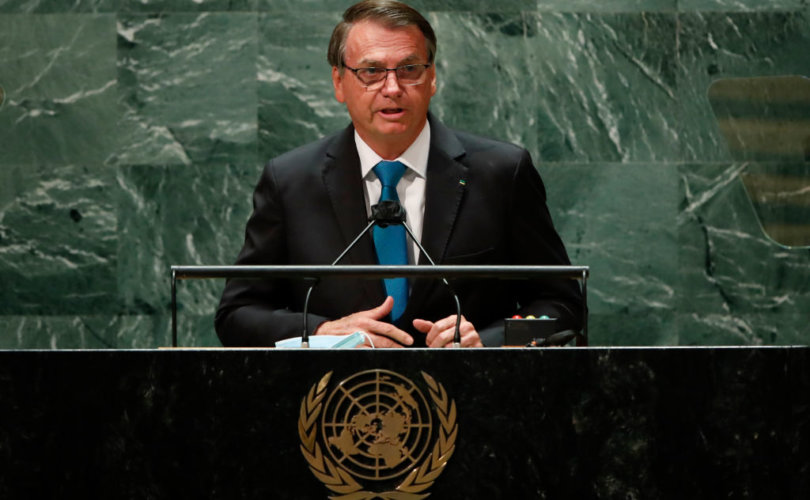 “Brazil has a president who believes in God, respects the Constitution, and values loyalty to the family. Brazil’s credibility has recovered in the world,” Bolsonaro stated in the room of delegates. “Since the pandemic started, we have supported doctor’s professional autonomy in the quest for early treatment measures in line with recommendations issued by the Brazilian Federal Council of Medicine.”

Bolsonaro, who is not vaccinated himself, decided to take an approach that supports freedom of choice for doctors and citizens alike, while many other countries have implemented strict vaccine passport systems, strict treatment protocols, and other forms of COVID-related coercion.

The president’s comment on maintaining “professional autonomy” for doctors stands out when compared to the recent announcement by three major American medical boards who said they support revoking or suspending medical licenses for doctors who do not conform to the mass vaccination narrative.

“We support the vaccination efforts,” Bolsonaro said. “Since November, everybody who wanted to take the vaccine has been taken care of,” but “our government has a clear position against mandates of either vaccination or health passports.”

Additionally, Bolsonaro made clear in his speech that included in his assurance of “autonomy” is the promise that physicians along with their patients’ consent, are to be the only factors in determining which treatments can and will be used while treating an illness.

“I respect in all circumstances, the doctor-patient relationship with regard to the drugs to be used [in treating COVID], in particular, the use [of a drug] outside the use indicated on the label,” said Bolsonaro. “We do not understand [why] some countries have a large part of the media opposed to this type of treatment, [but] history and science will judge them.”

Ivermectin is one of the drugs which has been mocked in the media.

The World Health Organization and other groups have also opposed promoting or recommending the drug, despite the scientific evidence pointing to its efficacy in reducing death as well as minimizing a person’s risk of contracting COVID when used preventatively.

Dr. Joseph Mercola, a leading physician on alternative COVID treatments, said, “The WHO’s rejection of ivermectin only makes sense if a) you take into account the EUA requirements; and b) remember that the WHO receives a significant portion of its funding from private vaccine interests.”

“The Bill & Melinda Gates Foundation is the second largest funder of the WHO after the United States, and The GAVI Alliance, also owned by Gates, is the fourth largest donor,” Mercola added. “The GAVI Alliance exists solely to promote and profit from vaccines, and for several years, the WHO director-general, Tedros Adhanom Ghebreyesus, served on the GAVI board of directors.”

Just last week a 43-year-old husband and father in Alabama died after being refused ivermectin, despite recent data showing the drug provides a “75% absolute risk reduction in mortality.”

Bolsonaro is the second world leader this week to object to vaccine coercion and condemn media manipulation surrounding the coronavirus crisis.

On Monday, Croatia’s President Zoran Milanovic told a reporter, “I don’t care, we’re vaccinated enough.” The reported had asked why there was not more of an effort to promote vaccination in the country.

“I start every day with CNN and those few channels, and I wonder if I’m normal or are they crazy,” Milanovic continued, while stating all the media does is “spread panic.”