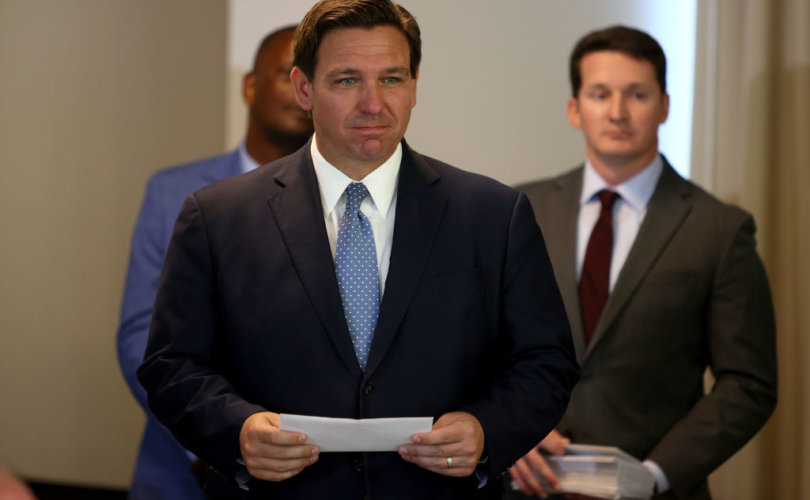 “The state of Florida is not going to serve as the Biden Administration’s biomedical police,” Pushaw said in a media statement shared with LifeSiteNews. “Firing unvaccinated healthcare workers, many of whom have infection-conferred immunity, is unethical and unscientific on its face.”

Pushaw pointed out that California, which has its own healthcare worker jab mandate, is experiencing a staff shortage.

The state is allowing COVID-positive staff to return before a negative test, despite barring individuals who do not want to get jabbed from working in healthcare settings.

“[H]ospitals in California and other states are now requiring vaccinated, COVID-infected healthcare workers to treat patients due to staffing shortages — which were exacerbated by vaccine mandates. How does that keep anyone safe?” Pushaw said.

“Any Floridian can access the required exemption forms on the Florida Department of Health website,” Pushaw continued. “So, there is no reason any Floridian should lose his or her job over a COVID vaccine mandate.”

Vaccination is a ‘private choice’

“In Florida, what we said was, nobody should be denied earning a living based on these jabs,” DeSantis said prior to Thursday’s rulings. “That’s your choice. It’s a private choice. It is not something the government should be forcing.”

“Clearly the vax has not stopped people from being infected with omicron that is just clear as day, and so what is the basis of forcing somebody else to do that?” DeSantis asked. He has been jabbed but has declined to say whether he has received a booster dose.

His administration applauded the stay against the OSHA requirement.

“We are excited that the Supreme Court rightly recognized the Biden admin’s overreach in trying to mandate vaccines through OSHA,” Communications Director Taryn Fenske said in a statement shared with LifeSiteNews. “We are disappointed about the CMS ruling and what it could mean for the livelihoods of doctors, nurses, and health professionals in our state.”

“As Florida’s prohibition on vaccine mandates remains in effect for all industries, we will be evaluating next steps for enforcement in the coming days,” Fenske said.

DeSantis used his Tuesday State of the State address to reiterate his opposition to the “biomedical apparatus.”

“Florida has become the escape hatch for those chafing under authoritarian, arbitrary and seemingly never-ending mandates and restrictions,” DeSantis said.

“Even today, across the nation we see students denied an education due to reckless, politically-motivated school closures, workers denied employment due to heavy-handed mandates and Americans denied freedoms due to a coercive biomedical apparatus.”

“Florida is a free state,” he said. “We reject the biomedical security state that curtails liberty, ruins livelihoods and divides society. And we will protect the rights of individuals to live their lives free from the yolk of restrictions and mandates.”