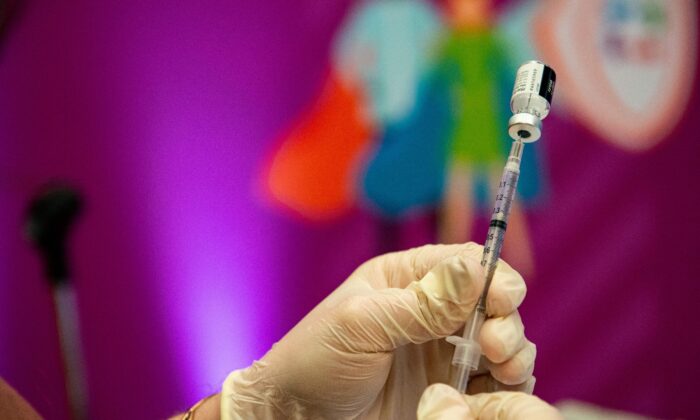 (Epoch Times Reported) – A U.S. military official predicted a pause in the administration of the Moderna and Pfizer COVID-19 vaccines could happen if more cases of post-vaccination heart inflammation were detected, according to newly obtained emails.

Harry Chang, a U.S. Army lieutenant colonel, made the prediction on April 27, 2021—the same day the director of the U.S. Centers for Disease Control and Prevention (CDC) said the agency was not seeing a safety signal when it came to heart inflammation experienced after getting a COVID-19 vaccine.

Chang noted the pause in the administration of the Johnson & Johnson vaccine over blood clots and said an increased number of heart inflammation issues could trigger a similar action.

“A pause of the Pfizer/Moderna administration (much like the J&J blood clot pause) will have an adverse impact on US/CA vaccination rates; assessed as unlikely due to causes of myocarditis can come from multiple sources (eg. COVID, other conditions, other vaccines/prescriptions, etc),” Chang wrote in an email.

“However, increased reported #s & media attention is likely to trigger a safety review pause by ACIP/FDA,” he added, referring to the Advisory Committee on Immunization Practices, which advises the CDC on vaccines, and the U.S. Food and Drug Administration (FDA), which decides whether to clear immunizations.

Chang was talking to Tricia Blocher, an official at the California Department of Public Health, and other California and military officials. He was reacting to a story about the U.S. Department of Defense detecting a higher-than-expected number of cases of heart inflammation in troops following COVID-19 vaccination.”

The email was one of 19 pages of messages obtained via FOIA.

Members of ACIP’s COVID-19 Vaccine Safety Technical Work Group (VaST) were sent the Pentagon story, as were some CDC officials, the emails show.

Among them was Dr. Tom Shimabukuro, a leader of the Vaccine Safety Team, part of the CDC’s COVID-19 Vaccine Task Force.

Shimabukuro almost immediately asked colleagues for data from the Vaccine Safety Datalink, a tracking system co-run by the CDC and nine health care organizations to monitor vaccine safety. Eric Weintraub, the project leader for the datalink, found that 24 cases of myocarditis had been automatically detected in the tracking system.

The email chain ended there, with no indication that the officials probed further to see if there was a possible link between the vaccines and heart inflammation.

Weintraub did not respond to a request for comment, nor did Chang, who assessed that the discovery of heart issues was “likely to add to further concerns by general public over vaccine safety and make the ‘vaccine wall’ more challenging to overcome.”

The emails “reveal there was an early red flag with post-mRNA COVID vaccine-related myocarditis reports in the U.S. and Israel” but that officials were concerned that acknowledging the risk “would have a negative effect on public perception of COVID vaccine safety and uptake,” Barbara Loe Fisher, co-founder and president of the National Vaccine Information Center, told The Epoch Times in an email.

“The historic reluctance of public health officials to acknowledge that vaccines carry serious risks, which are greater for some people, is one of the biggest impediments to improving the safety of the mass vaccination system,” she added.

Both the Moderna and Pfizer shots are built on messenger RNA, or mRNA, technology.

On the same day as the emails, Dr. Rochelle Walensky, the CDC’s director, told reporters during a virtual briefing that after learning of the Pentagon’s discovery, the CDC examined its data and did not see an elevated rate.

“We have not seen a signal, and we’ve actually looked intentionally for the signal in the over 200 million doses we’ve given,” she said.

It’s not clear what data Walensky was relying upon. She did not respond to an inquiry.

Shimabukuro, asked if he had advised Walensky on whether a pause should be imposed, referred comment to the CDC. A spokeswoman for the agency told The Epoch Times in an email, “Vaccination policy is the purview of CDC’s Advisory Committee on Immunization Practices (ACIP) and it would be best to contact the CDC ACIP staff with questions concerning pausing vaccination.”

The CDC sets vaccination policy, but often consults with the ACIP before doing so.

Myocarditis and a similar condition, pericarditis, are serious issues that often force people to stop exercising and undertaking other physical activities for a period of time. In some cases, the conditions may lead to death. Most cases detected following vaccination require hospitalization. Some people are suffering long-term effects.

“I understand that the public health authorities are using a very different risk/benefit calculus because the disease in question is infectious, but there were certainly other options to consider rather than take a one note approach of 2 vaccines for every young healthy male 20 some days apart,” Koka said.

Both the Moderna and Pfizer vaccines are administered in 2-dose primary series. Boosters are now recommended because the vaccines aren’t as effective as previously claimed.

Neither the CDC nor ACIP released reports on post-vaccination heart inflammation for weeks after the Pentagon detection went public.

The first report from ACIP, a summary of presentations given behind closed doors, said that myocarditis rates after vaccination did not differ from expected rates, which are established using baselines based on the regular occurrence of the condition in the general population.

A few weeks later, however, the panel acknowledged that there were higher than expected rates of post-vaccination heart inflammation, detailing the numbers in a report dated May 24, 2021.

Shimabukuro presented data on the higher-than-expected rates during public meetings the following month. He revealed that myocarditis and pericarditis were being reported at much higher rates than expected in males aged 12 to 29, but claimed it was too soon to indicate a link between the issues and the vaccines. He and others soon said data points “suggest an association with immunization,” and VaST said the data suggested a “likely association.”

Around the same time, the FDA added warnings about heart inflammation to fact sheets that are distributed to vaccine recipients, caregivers of recipients, and medical professionals who administer the shots, and military doctors reported more cases than expected among troops who received one of the vaccines.

Approximately 341 cases of myocarditis or pericarditis following vaccination had been reported to the Vaccine Adverse Event Reporting System (VAERS), a passive system managed by the CDC and the FDA, by the end of April 2021.

Some reports have been deleted, potentially skewing the numbers. Additionally, studies indicate reports to VAERS are an undercount.

Based on the reports that have been made, rates of myocarditis are higher than expected in males as young as 5 and as old as 49 after the second dose, according to data Shimabukuro shared at an FDA meeting on June 7. The highest rate is among 16- and 17-year-old males, with 76 reports per one million second doses and 24 cases per one million third doses.

The CDC in February advised some people to wait longer between the first and second shots to try to minimize the risk of heart inflammation.

But some experts say the rates mean that healthy, young people should not get any of the doses, since COVID-19 primarily presents severe problems to the elderly and those with underlying conditions such as kidney disease.

Multiple countries have paused the Moderna vaccine for youth, due to the heart inflammation.

Other experts say at least one dose is recommended, while still others, and the CDC, continue to recommend vaccination for virtually all Americans 5 and older.

The pause on Johnson & Johnson’s vaccine over blood clots was eventually lifted, but the FDA in May restricted its use. There was never a pause on the Moderna or Pfizer vaccines in the United States.

One thought on “EXCLUSIVE: Military Official Predicted mRNA COVID-19 Vaccines Might Be Paused Over Heart Inflammation”