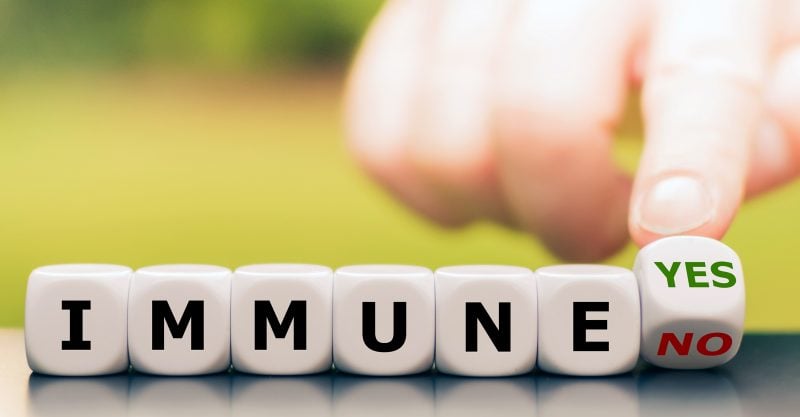 There is now a growing body of literature showing natural immunity not only confers robust, durable and high-level protection against COVID, but also provides better protection than vaccine-induced immunity.

Yet, the Centers for Disease Control and Prevention (CDC) is ignoring the long-standing science of natural immunity when it comes to COVID — while acknowledging the benefits of natural immunity for other diseases — according to an expert who accused the agency of providing contradictory, ‘illogical’ COVID messaging.

Makary joined the “Clay Travis and Buck Sexton Show” to discuss the clinical impact of natural immunity as it compares to the vaccine.

During the show, Travis pointed out the CDC’s guidance on COVID is inconsistent with its vaccine recommendations for other contagious viruses, like chickenpox.

The CDC’s current guidance for chickenpox, for example, does not encourage those who have contracted it to vaccinate themselves against the virus. The CDC only recommends two doses of chickenpox vaccine for children, adolescents and adults who have never had chickenpox.

“So why doesn’t the CDC say the same thing about those of us who already had COVID?” Travis asked.

“It doesn’t make sense with what they’re putting out on chickenpox,” Makary said. It’s like they have adopted the immune system for one virus, but not for another virus, he said, and “cherry-picking the data to support whatever they’ve already decided.”

“They salami slice it — something we call fishing in statistical techniques,” Makary said. “That is when you look for a tiny sliver of data that supports what you already believe.”

According to a Sept. 13 article in The BMJ, when the COVID vaccine rollout began in mid-December 2020, more than a quarter of Americans — 91 million — had been infected with SARS-CoV-2, according to CDC estimates.

As of this May, that proportion had risen to more than a third of the population, including 44% of adults between the ages of 18 and 59.

However, the CDC instructed everyone, regardless of previous infection, to get fully vaccinated as soon as they were eligible. On its website, the agency in January justified its guidance by stating natural immunity “varies from person to person” and “experts do not yet know how long someone is protected.”

By June, a Kaiser Family Foundation survey found 57% of those previously infected got vaccinated.

Dr. Anthony Fauci, President Biden’s chief medical advisor, was asked Sept. 10 by CNN’s Dr. Sanjay Gupta whether people who have tested positive for the virus should still get a vaccine.

Gupta cited recent data from Israel suggesting people who recovered from COVID had better protection and a lower risk of contracting the Delta variant, compared to those with Pfizer-BioNTech’s two-dose vaccine-induced immunity.

“I don’t have a really firm answer for you on that,” Fauci said. “That’s something we’re going to have to discuss regarding the durability of the response.”

The research from Israel did not address the durability that natural immunity offers. Fauci said it is possible for a person to recover from COVID and develop natural immunity, but that protection might not last for nearly as long as the protection provided by the vaccine.

“I think that is something that we need to sit down and discuss seriously,” Fauci said.

Numerous studies, however, have shown people who recovered from COVID have robust, durable and long-lasting immunity.

As early as November 2020, important studies showed memory B cells and memory T cells formed in response to natural infection — and memory cells respond by producing antibodies to variants at hand.

A study funded by the National Institutes of Health and conducted by the La Jolla Institute for Immunology, found “durable immune responses” in 95% of the 200 participants up to eight months after infection.

One of the largest studies to date, published in Science in February 2021, found that although antibodies declined over eight months, memory B cells increased over time, and the half-life of memory CD8+ and CD4+ T cells suggests a steady presence.

In a study by New York University published May 3, the authors studied the contrast between vaccine immunity and immunity from prior infection as it relates to stimulating the innate T-cell immunity — which is more durable than adaptive immunity through antibodies alone.

“In COVID-19 patients, immune responses were characterized by a highly augmented interferon response which was largely absent in vaccine recipients. Increased interferon signaling likely contributed to the observed dramatic upregulation of cytotoxic genes in the peripheral T cells and innate-like lymphocytes in patients but not in immunized subjects.”

“Analysis of B and T cell receptor repertoires revealed that while the majority of clonal B and T cells in COVID-19 patients were effector cells, in vaccine recipients, clonally expanded cells were primarily circulating memory cells.”

This means natural immunity conveys much more innate immunity, while the vaccine mainly stimulates adaptive immunity — as effector cells trigger an innate response that is quicker and more durable, whereas memory response requires an adaptive mode that is slower to respond.

According to a longitudinal analysis published July 14 in Cell Medicine, most recovered COVID patients produced durable antibodies, memory B cells and durable polyfunctional CD4 and CD8 T cells –– which target multiple parts of the virus.

“Taken together, these results suggest broad and effective immunity may persist long-term in recovered COVID-19 patients,” the authors said.

In other words, unlike with the vaccines, no boosters are required to assist natural immunity.

In a May 12 study conducted by the University of California, researchers found natural immunity conveyed stronger immunity than the vaccine.

“In infection-naïve individuals, the second [vaccine] dose boosted the quantity but not quality of the T cell response, while in convalescents the second dose helped neither. Spike-specific T cells from convalescent vaccinees differed strikingly from those of infection-naïve vaccinees, with phenotypic features suggesting superior long-term persistence and ability to home to the respiratory tract including the nasopharynx.”

According to The BMJ, studies in Qatar, England, Israel and the U.S. have found infection rates at equally low levels among people who are fully vaccinated and those who have previously had COVID.

As The Defender reported in June, the Cleveland Clinic surveyed more than 50,000 employees to compare four groups based on history of SARS-CoV-2 infection and vaccination status.

Not one of more than 1,300 unvaccinated employees who had been previously infected tested positive during the five months of the study. Researchers concluded the cohort “are unlikely to benefit from COVID-19 vaccination.”

In the largest real-world observational study comparing natural immunity gained through previous SARS-CoV-2 infection to vaccine-induced immunity afforded by the Pfizer vaccine, researchers in Israel found people who recovered from COVID were much less likely than never-infected, vaccinated people to get Delta, develop symptoms or be hospitalized.

“Our results question the need to vaccinate previously infected individuals,” they concluded.

Experts speak out on natural immunity

The authors of the letter said the “SIREN” study in the Lancet addressed the relationships between seropositivity in people with previous COVID infection and subsequent risk of severe acute respiratory syndrome due to SARS-CoV-2 infection over the subsequent seven to 12 months.

The study found prior infection decreased risk of symptomatic reinfection by 93%.

A large cohort study published in JAMA Internal Medicine which looked at 3.2 million U.S. patients, showed the risk of infection was significantly lower (0.3%) in seropositive patients compared to those who were seronegative (3%).

A recent study published in May in the journal Nature demonstrated the presence of long-lived memory immune cells in those who have recovered from COVID-19 suggesting durable and long-lasting immunity.

“This implies a prolonged (perhaps years) capacity to respond to new infection with new antibodies,” the authors wrote.