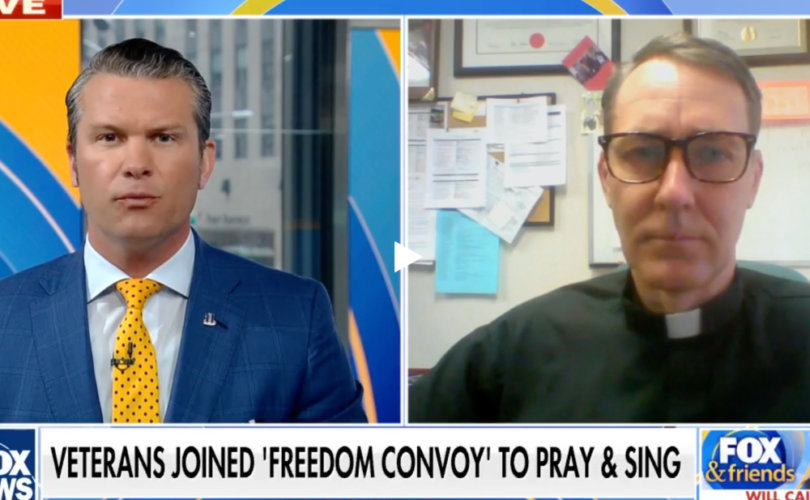 (LifeSiteNews) — A veteran Canadian military chaplain said that Justin Trudeau has “declared war” on his people, treating the Freedom Convoy and its supporters as “terrorists.”

Speaking to Christian Issues, Etc., Pastor Harold Ristau said that from the beginning the Convoy had been met with “lies, demonisation, antagonisation, from the government, from Justin Trudeau’s own lips.”

Trudeau’s invocation of the Emergencies Act means that “you basically declare war on your own people,” said Ristau, born in Ontario.

Reverend Harold Ristau, a Lutheran pastor and military chaplain who served multiple tours in Iraq and Afghanistan, joined the Freedom Convoy in Ottawa where he led veterans in removing a blockade around a war memorial, before leading them in prayer and a rendition of “O Canada.”

Doubling down on his radio comments, Ristau told Fox News that Canadians’ concerns over the increasing mandates and COVID restrictions had “fallen on deaf ears,” leading freedom-loving Canadians to join in the Freedom Convoy.

“Justin Trudeau has made it clear without using the word terrorist, he’s basically treated the protesters as he could with any terrorist organization, saying I won’t negotiate with terrorists,” said Ristau.

Ristau slated Trudeau for the Prime Minister’s denigration of the convoy as a “fringe minority,” saying that the opposite is true as “the protestors are within the millions.”

“The only acts of violence actually happened in the last couple of days by the police,” noted Ristau, taking aim at Trudeau’s invoking the Emergencies Act. “He has treated us as if we’re terrorists.”

“We have masses of people praying in front of the police as they come in and use pepper spray and rubber bullets on them,” Ristau told The Federalist. “When it’s illegal to protest illegality, what measures do we have left?” Ristau asked.

“Once you’ve named someone a terrorist, I guess you can just do what you want,” he added.

A recipient of the Chief of the Defense Staff Commendation for “achievements beyond the line of duty,” Ristau spoke of how his experience in the line of fire taught him the “the importance of freedom.” The attack on freedom currently underway in Canada scared him more than his experience on the battlefield, he said.

His opposition to the COVID mandates was born out of his Christian duty and was an example of “standing for the sake of Christ,” he declared. “As a Christian, I am interested in ensuring that our freedom of speech is ensured, that the preaching of the gospel is not muzzled.”

But he ridiculed Trudeau’s depiction of the Freedom Convoy as “terrorists,” saying that “my parents escaped from Germany under the Nazis and Communists. I’ve seen real terrorism. Our freedoms are at stake here.”

One thought on “Former Canadian military chaplain: Trudeau has ‘declared war’ on Canadians, treats them as ‘terrorists’”