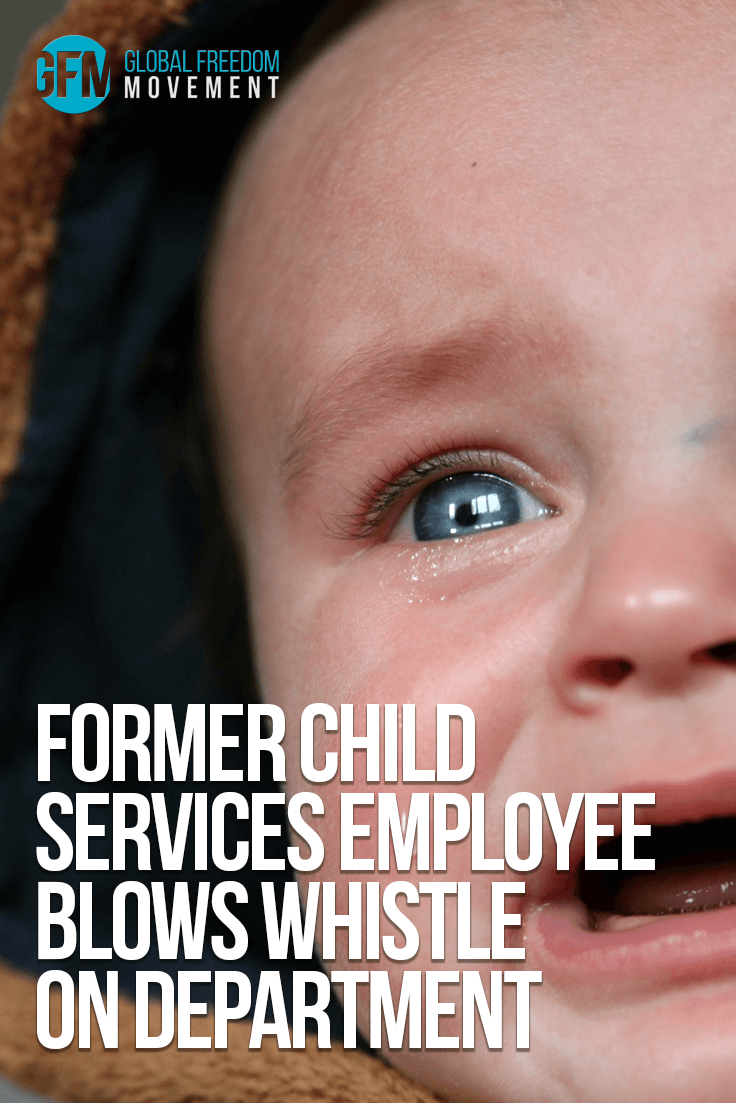 What you are about to read is incendiary in its content and ramifications. A former government employee has blown the whistle on the corruption and incompetence that is endemic within New South Wales (NSW) child services (now known as Family and Community Services). I can vouch for this man’s integrity and good will as he also happens to be a personal friend.

This letter comes at a time when the attention of Australia and the Western world has increasingly been focused on the saga of four year old Chase Walker-Steven and his parents’ (Cini Walker and Marc Steven) protracted and totally sickening and unnecessary battle with predatory workers at Lady Cilento Hospital (Brisbane) and their “accomplices” at child services. Chase, who has been severely impact by multiple toxic hospital interventions (and general incompetence), has cerebral palsy and seizures (when he is not taking medicinal cannabis oil). He is peg-fed and requires the 24-hour care and attention of his devoted parents as well as the regular intake of cannabis oil to prevent the seizures, of which he was having around 100 a day before he started on the oil (after which his seizures dropped to virtually nil).

Chase was wrongfully and forcibly kidnapped in a highly traumatic “raid” by FACS workers and police on Friday the 19th of May, 2017, with his mother Cini sustaining multiple bruises from being repeatedly kicked by the perpetrators as she tried to protect him. It is two weeks and counting since he was taken. The knowledgeable portions of the Australian community genuinely fear for Chase’s wellbeing while he is in hospital – without the medicinal cannabis oil to control his seizures and without healthy wholefoods. We pray for his safety and a speedy return home. #BringChaseHome

Not all people who work in these government departments are “evil,” and in fact we personally know some who are amazing human beings, but as you’re about to read in Phillip Watt’s insider testimony, too few of them would qualify as being even minimally capable of performing their jobs adequately. In Phillip’s words, there is “an entrenched cultural toxicity that pervades” the department of FACS. Watt is especially calling attention to the systemic obstacles in place throughout the agency that prevent workers doing their jobs humanely and effectively.

The system is very clearly broken.

Following the preamble in text below (from Phillip’s Facebook post) are the scanned images of Phillip’s original August, 2016 email to Michael Coutts-Trotter (secretary of the NSW Department of Family and Community Services) detailing the endemic and very serious problems rotting FACS/child services at its core.

Below the video you’ll find a harrowing video account from young mother-to-be Nina Wilson about what the department has planned for her and her unborn child, which the government has placed a dollar value on. (Each child is worth thousands of dollars if it can be removed from its parents and placed into foster care – the system actually incentivizes the destruction of families.) Please watch the full eight minutes.

For the record, Coutts-Trotter never responded to Phillip Watt’s detailed email. Since August 2016, it appears that little has changed at FACS, also known to the Australian community as the Department of Child Snatchers.

Prepare to be disgusted.

From a FACS Employee: A no-holds-barred letter to Michael Coutts-Trotter (Secretary of FACS)

This is for all the families like that of Chase Walker-Steven who have been torn apart by the medico-political complex. It is also for the Australian Community as a whole.

My name is Phillip J. Watt and I am a former employee of the NSW Department of Family and Community Services (FACS). I have decided to publicly release a departing letter I sent to the highest Manager of FACS, Michael Coutts-Trotter, about the malpractice and destructive behaviour I witnessed whilst I worked at the Department (see images below).

Unfortunately, Michael did not respond to my concerns.

This letter also outlines why the entire agency is setup to fail, if it hasn’t already. I emailed it to Michael just before I resigned as I felt I had a public responsibility to do so. I needed to make sure that my knowledge and experience was escalated to the highest possible level so that I could leave knowing that I had done all I could to help heal the toxicity in this (so-called) public utility.

To be fair, however, there are many good people who work at Community Services. They are genuinely there to make a difference for their community, so it’s important to acknowledge that. Once you see some of the abuse that children and parents are subjected to it is beyond clear that there is a need in some cases for community intervention. Personally I believe this should be handled locally by tightly-integrated and supportive community networks, but the reality is that our communities – our tribes – are highly fragmented, distracted and poorly organised.

Enter statutory intervention. Love it or hate it, it’s necessary in some cases. The problem is that it can and is misused and abused. Personally I did not remove any child from their parents in the six years I worked for the agency, however I wouldn’t have thought twice about doing so if a child was in imminent danger. But for me, it never came to that. And if it did, I would have worked my ass off to hopefully help the parents understand and resolve their issues so that their child or children could return home to a safe environment.

My approach was to not overreact to risk, but instead work hard to minimise it. I am very proud of my ability to effectively engage with parents, children and families in highly challenging circumstances and help them to create healthier relationships with each other.

This however, was not the norm.

I had ongoing issues with staff and managers during my employment there. It was ironic, because most of my clients were fond of me and held my professional but compassionate approach in high regard, but I was constantly bullied by some of my colleagues because I would stand up for what was right, not what I believed were unhealthy and destructive work practices. Accordingly, these were the type of staff who had poor relationships with their clientele, as well as other employees who were not afraid to speak up against the status quo.

And let me be very clear: the standard behaviour of the agency is not just ill-informed and poorly skilled, but damaging too. Granted, there were more progressive and ethical policies making their way down from the top, but evolving the culture of the agency proved to be like teaching an old dog new tricks. There is even a word for staff who were trigger-happy and therefore would shoot first and ask questions later: they were called ‘removalists’. A lot of the time these were managers who would make decisions independent of Caseworker recommendations. I watched them break apart families and amplify child and parental trauma, as well as completely disrespect the role they had as an advocate for our primary clients, who were the children.

I lost count on the times I experienced this, but from my point of view, one was too many.

In many ways I suffered whilst working there, but I persisted because I knew I was making a positive difference. I was facilitating at least some level of sustained change in people’s lives who were faced with high degrees of socioeconomic, psychological, behavioural and other dysfunctions and challenges. I engaged my colleagues, including new staff, with an open, honest dialogue about both the strengths and weaknesses of the agency, including contextualising them in the bigger picture. I once saved a person’s life too.

Additionally, there were also many times that I thought “I’m so glad I’ve got this case, otherwise certain staff would have removed the children by now”. In times I was helping out with cases that weren’t my own I had dozens of clients speak critically about their own caseworker, as well as more or less say to me “thank you for making me feel listened to and like you actually care”. I was always astounded when it happened because to me I wasn’t doing anything special, it was just a basic role of the job.

For an organisation that was meant to be helping people, there sure seemed to be a serious lack of empathy, let alone the capacity to actually help. Moreover, even though I had a couple of great managers, there were others who would order their staff to do things against their professional judgement and ethical will. Personally I found myself regularly having to upwardly manage, otherwise more unnecessary damage would have been done. Unfortunately, a lot of the more conscious staff didn’t have the confidence or experience to do this.

But let’s put aside those with a misplaced power-trip for a moment, which let me tell you are as common as what you might expect, regardless if they recognise it within themselves. Even though most of the staff probably have the right intentions, the skills and knowledge are in general nowhere near where they need to be, so in many situations more harm was done than good. To be fair again though, a social worker is one of the most challenging jobs there is because of the critical, dynamic, responsive and influential nature of the work, so with only mediocre salaries (particularly in the private sector) and a general lack of acknowledgement and appreciation from society it is very hard to attract the right people into the industry.

Make no mistake though; there are many staff who are amazing at their job, and I was proud to work alongside some of them.

Ultimately, we really need to ensure that these types of public mechanisms translate into an actual service, not a disservice. There needs to be better training for those in the industry, as well as much greater access to community-run programs to help re-educate and re-empower parents, families and society as a whole. Moreover, the only way we’re going to avoid cases like Chase reoccurring is by treating these issues as a symptom of a greater disease, including stepping up as individuals and communities to bring the truth, no matter how challenging, to the forefront of public dialogue and debate. Simply, there are many transformations we need to go through, both philosophically and systemically, so I hope the following letter can help generate some greater understanding of not just what’s wrong with this alleged child protection operation, but the way our entire social system is designed too.

In the pursuit of truth and justice,
Phillip J. Watt. 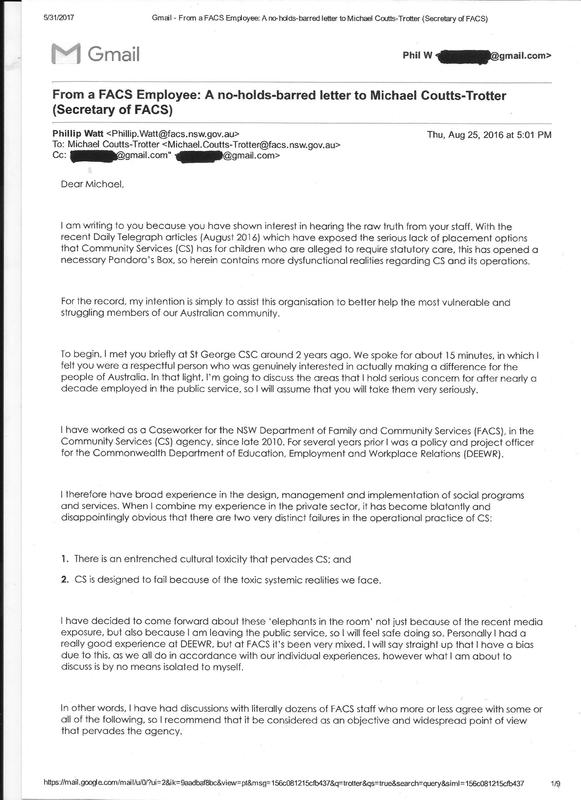 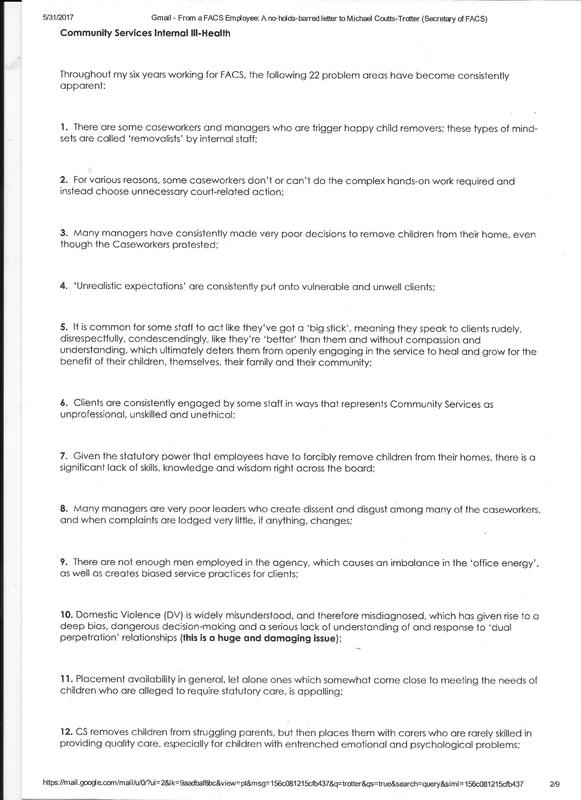 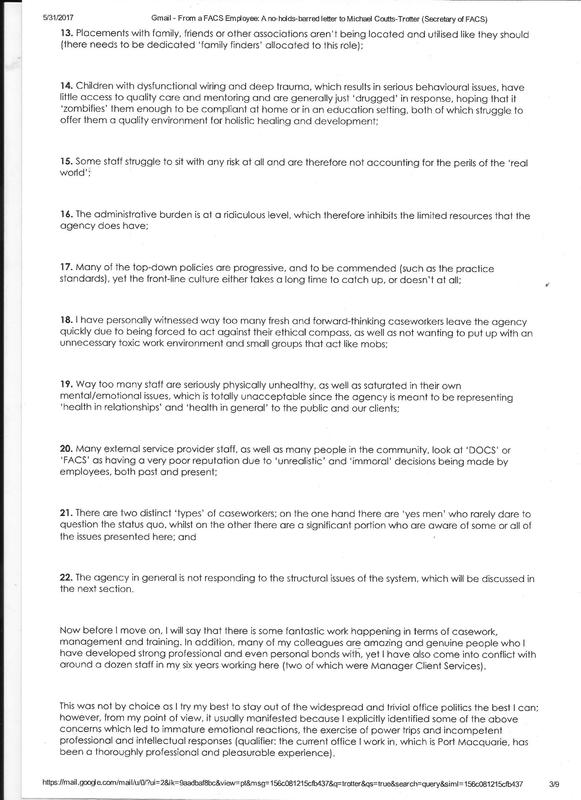 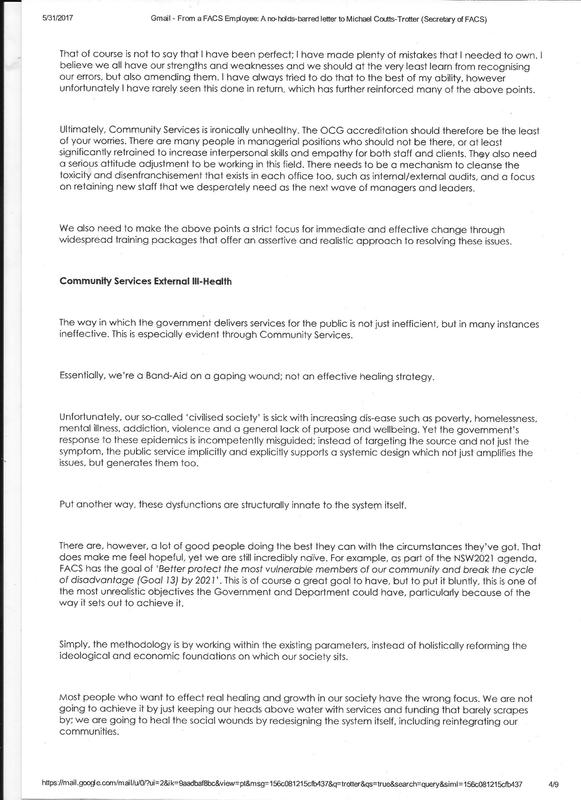 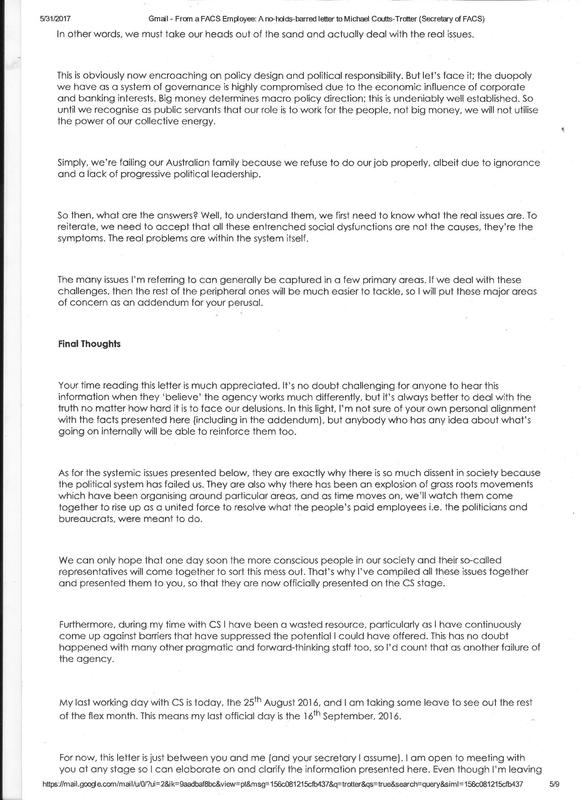 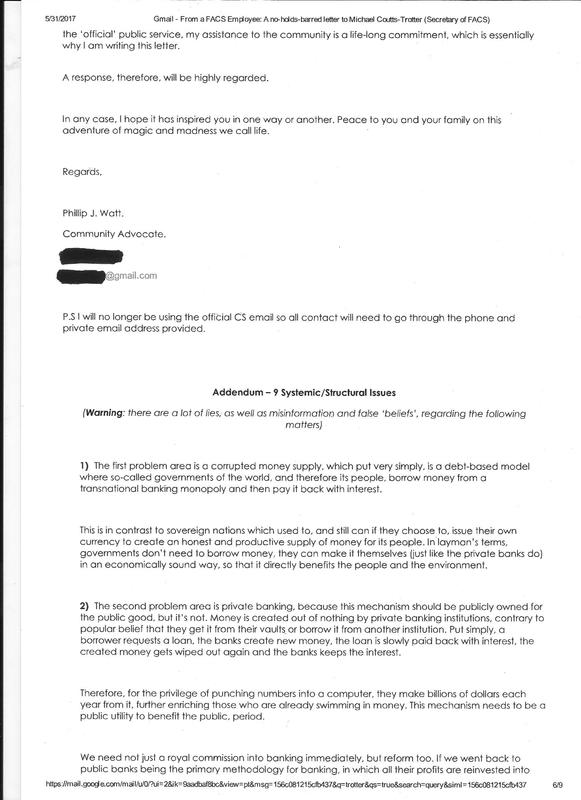 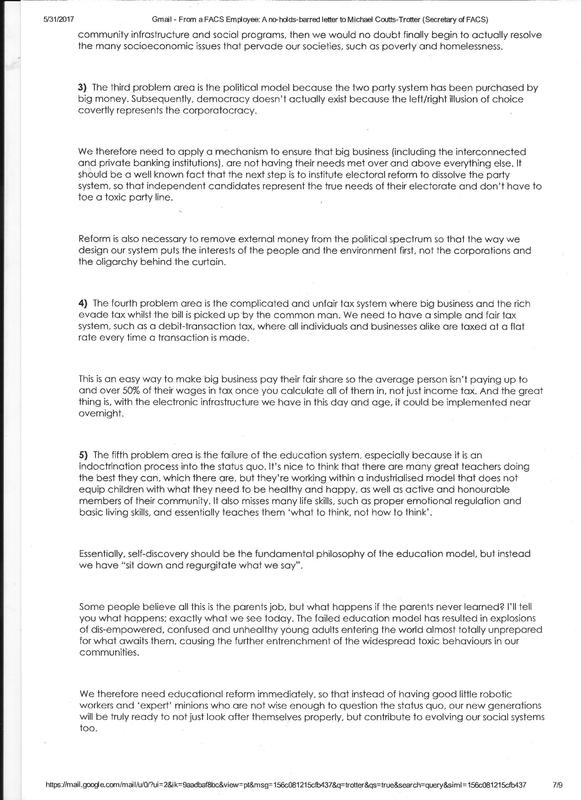 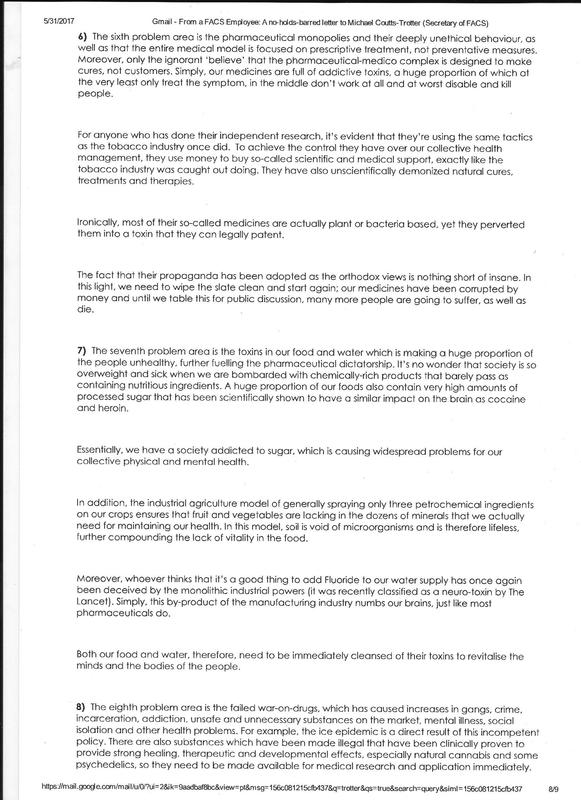 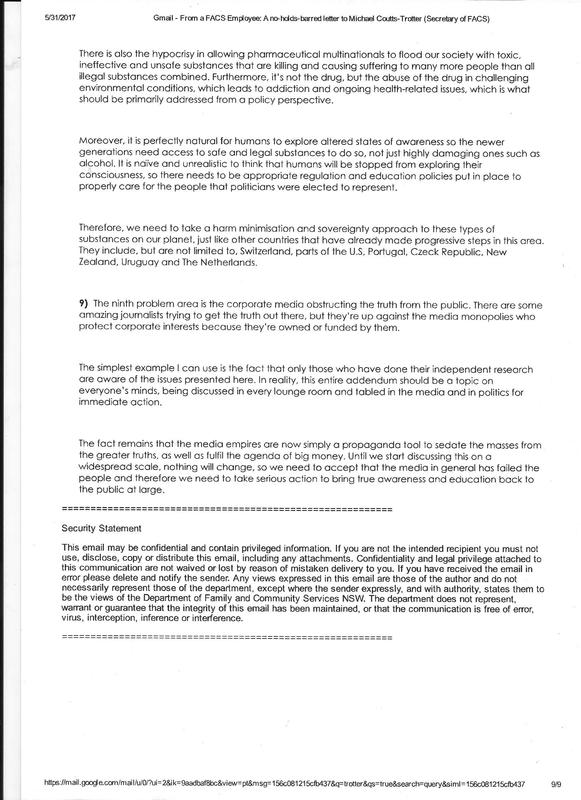 To make a complaint to Secretary Coutts-Trotter’s office or other inquiries, you can phone or email.