Climate engineering operations continue to create winter weather chaos in parts of the US, Canada and Europe. Chemical ice nucleation elements are a core component of global geoengineering programs. Winter weather whiplash, freezing rain, freezing drizzle / fog, and “thunder snow” conditions, all are indicative of chemical ice nucleation materials being dispersed into available atmospheric moisture. Ice nucleating elements create an endothermic (energy absorbing) reaction that, in turn, produces a colder, heavier air mass. The heavy dense air then sinks to ground surface levels. This shallow layer of cold air lowers surface temperatures and thus produces the sensationalized headlines of cold weather that the climate engineers and the power structure corporate media are seeking.  “Winter Storm Harper” recently took its toll on specific regions of the Eastern US. “Winter Storm Indra” is now winding down with less impact than than the climate engineers had originally hoped (or scheduled) to achieve. Naming “winter storms” adds to the sensationalizing of these completely engineered events. 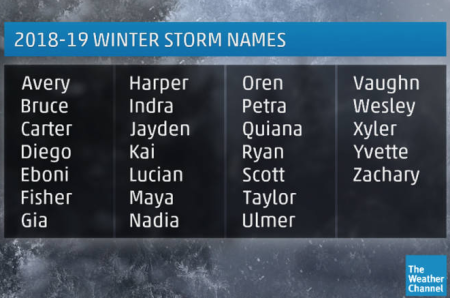 Corporate media faithfully follows the scripts and talking points they are given in their coverage of the completely engineered “winter weather”, while completely omitting the unfolding planetary meltdowns occurring in so many other locations around the world. The scripted nature of mainstream meteorologist’s narratives is not hard to see through. Corporate meteorologists are playing the part of cover-up for the climate engineering programs.

The temperatures and precipitation types (frozen or liquid) in the current condition and forecast screenshots below should be examined and considered. The scheduled weather in three locations were captured, Jamestown, NY, Binghamton, NY, and Nashville, TN. 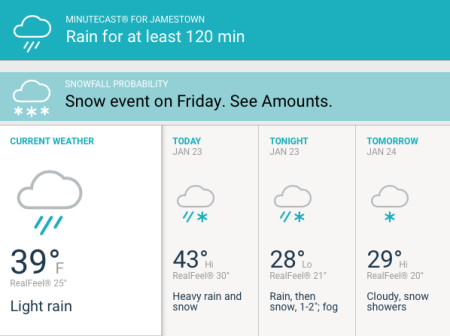 Why is snow falling at 43 degrees? Why is it still raining at 28 degrees?

The next “forecast” capture was for Binghamton, NY. 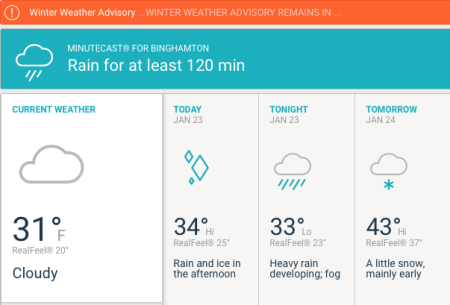 The final “forecast” capture is for Nashville, TN. 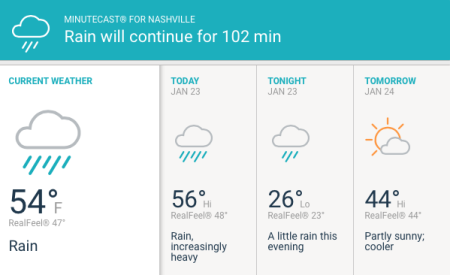 This weather information screen for Nashville, TN, is also perplexing. The flow of rain over Nashville is coming right out of the Gulf of Mexico, thus the high temperatures of 56 degrees and rain. This same flow of warmer moisture somehow “turns over” to snow further north, with temperatures still being far above freezing. The “forecast” map above (scheduled weather) calls for an extremely anomalous temperature plunge of some 30 degrees with continuous rain. With a constant flow of warmer moisture out of the south, why would there be such a sudden 30 degree temperature drop? Generally, day to night temperatures only vary by a few degrees when a constant flow of precipitation is occurring. Why would it still be raining at 26 degrees?

The animation below reveals precipitation flow and wind patterns that were present during the peak of “Winter Storm Indra”.

In this animation view of precipitation and wind, the source of moisture for “Winter Storm Indra” can clearly be seen. Warm Gulf of Mexico moisture and temperate wind from the south western Atlantic Ocean are primary components of “Winter Storm Indra”. The same conditions were present for “Winter Storm Harper” and countless other “winter storms” in recent years. Are such extreme anomalies an act of nature? Or the result of climate engineering operations?

The next animation even more clearly reveals the very unlikely and questionable source of moisture for a “winter storm”.

The flow of temperate moisture from the Gulf of Mexico (shown) was the primary fuel for “Winter Storm Indra”. Some regions in this animation can be seen flashing from liquid precipitation (rain), to frozen (ice storm or snow), and back again. Such a “change over” at above freezing temperatures can only occur when an unnatural ice nucleating factor is in the equation, that factor is chemical ice nucleation for weather modification elements. These are patented processes.

Engineered winter events, chemical ice nucleation, and its effects, can be viewed in a 16+ minute segment of the presentation below (from 1:22:54 to 1:38:00), the video is pre-set to start at the beginning of this section on engineering winter.

Below is the NOAA forecast (scheduled) departure from normal high temperature map for late January, 2019. The extreme opposites of temperatures from one side of the country to the other are historically unprecedented (though are now becoming the norm in recent years). 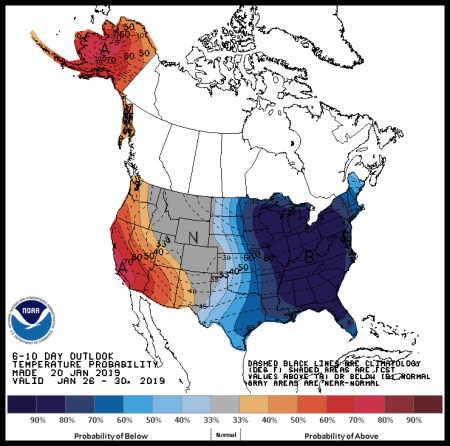 While the Eastern US is scheduled for yet more engineered cool-down scenarios, locations like Alaska have been kept warm and dry. Record shattering heat is persisting and accelerating in other parts of the world as well, Australia is only one example of many.

What is the global temperature perspective? The GISS departure from normal high temperature map below is for a recent 1 year period. This average temperature compilation map is extremely revealing and should be carefully considered. The only consistently anomalously cool-down zone on the planet is the  eastern half of the North American continent. Is it just a coincidence that the country with by far the world’s largest military and air force (and thus by far the largest climate engineering operations) has had the only consistent and extremely anomalous cool-downs over its most populated regions over extended spans of time? Again, is this just a coincidence? No. 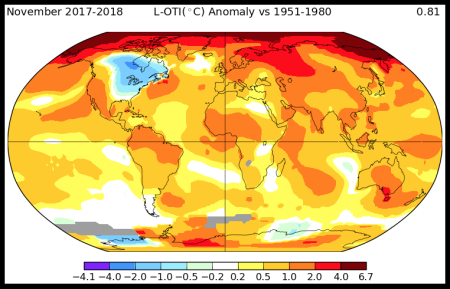 The short video report below provides yet more in depth detail of the ongoing freeze / fry scenarios being created by climate engineering operations.

Are there US patents for chemical ice nucleation for weather modification? Yes, one example is below:

Our planet’s life support systems are being systematically decimated by the ongoing climate engineering insanity, it must be exposed and halted. Help us in this most critical battle to sound the alarm, share credible data from a credible source, make your voice heard.