Visible signs of biosphere collapse can be seen everywhere, but how many seem to notice? What would our world be like without trees? We would never know, because without trees, we would not be here. Why are leaves now dying on DECIDUOUS trees after specific rains in the fall season (even without cold temperatures present) and hanging on many trees all winter long? This phenomenon is completely unnatural (for deciduous trees) and is occurring both in urban and wilderness settings. Some farmers / growers have been using defoliants for decades in order to force their trees into dormancy, certainly governments could do this on almost any scale with the climate engineering operations.  Why aren’t official agencies doing any investigation or testing? Are the climate engineers utilizing defoliants during fall rains as a part of their ongoing geoengineering operations? Is this a method to force deciduous trees into dormancy when the average temperatures are now too warm in many locations to create natural dormancy and subsequent leaf drop? Again,chemicals for forcing dormancy in trees have been used by some farmers for decades. Climate engineering fueled extreme weather whiplash is becoming rapidly worse all over the globe. Nature’s former balance has been completely derailed, how far will the geoengineers go to mask the severity of biosphere collapse from the public till the last possible moment? The 11 minute video below documents the completely unnatural (and historically unprecedented) scenario of dead leaves hanging on numerous deciduous tree specimens for the entire winter season.

The phenomenon of many deciduous trees being fully foliated with dead leaves thru the entire winter is not localized, but global. 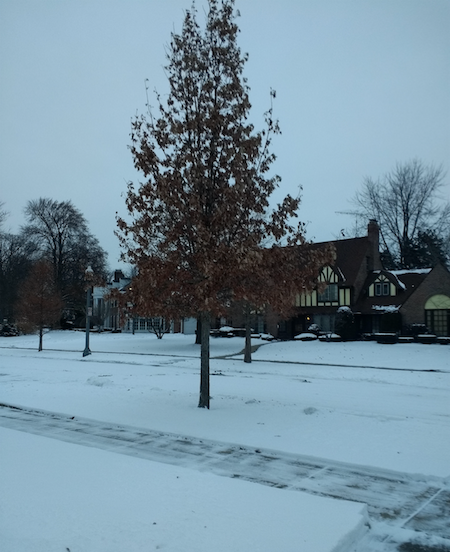 We are all a part of a grand and lethal climate engineering experiment which has been forced on us without our knowledge or consent. The masses must be awakened to what is occurring, a critical mass of awareness in the population must be achieved, that is the only way forward. Make your voice heard in this most critical fight to expose the ongoing geoengineering insanity. Sharing credible data from a credible source is the most effective and efficient way to wake others up to what is unfolding, we must all do our part while it can still make a difference.