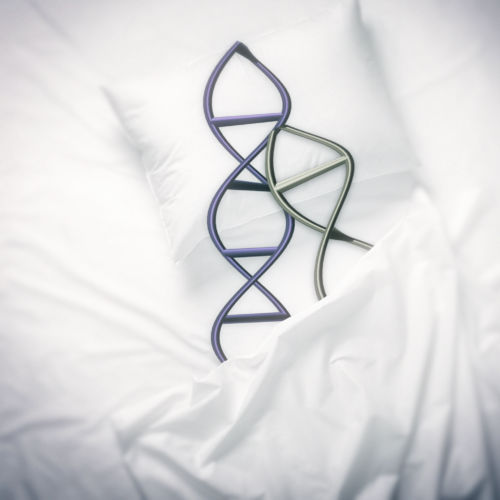 The more we learn about genes the more they get a bad rep. Yes, Jennifer, certainly there are people who have a genetic predisposition to obesity, but that’s an infinitesimally small percentage. I’m thinking the potato chips and lack of motion might have more to do with it in your case than Crick and Watson.

But now good news for late bloomers has emerged from the field of genetic study. Or if not good news, then at least cold comfort: it turns out that the age at which a person loses his or her virginity might be tied to genetics. The same study seems to indicate that genetic makeup will also help determine when a person hits puberty and when they have their first child.

Of course, in matters of sexuality, humans are endlessly complex. So of course societal and family elements are going to outweigh simple genetics. For instance, the researchers say, teenagers who are genetically predisposed to experiment with sex at a younger age are less likely to do so if their parents won’t let them out of the house or if they is for instance a strong familial or religious commitment to abstinence.

On the other hand, adolescents who are biologically inclined to wait longer before having sex might have sex earlier due to peer pressure or other influences.

But senior author John Perry, a University of Cambridge geneticist, said DNA plays more of a role than people might think. Genetics, his team’s research shows, accounts for 25 percent of the difference between having sex for the first time at 15 or 20.

“It’s one of those things that people think is completely choice,” Perry said. “Sure, choice has a massive role in this, but there are biological and genetic factors, too.”

And given the thoroughness and scope of the study it would seem to be foolish to dismiss it out of hand. The team looked at genome and survey data from over 125,000 UK participants, and identified 38 genetic variants that could play a role in deciding when people lose their virginity. When they analyzed data from Iceland and the US, they came up with similar results.

It should be said that such a study is purely correlational, meaning Perry and his team were able to correlate data on reported first sexual encounter with a person’s genome, but the fact of that correlation does not necessarily indicate causation. In other words, there won’t be anyone claiming to have found the “early loss of virginity gene” anytime soon.

That said, researchers say it could prove a fruitful window in puberty and human sexuality, and how people experience different outcomes.

If nothing else, you’ve got one more thing you can blame your parents for. Now if only you could blame them for the body odor and the acne…