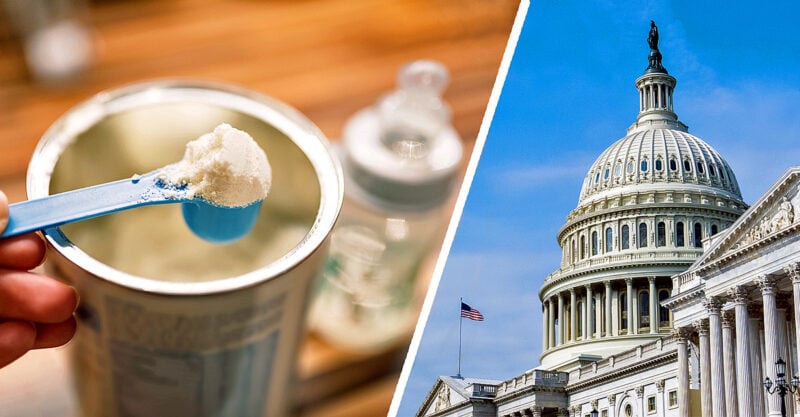 In a House briefing, DeLauro said there are two parts to the nationwide shortage: safety and supply, and “parents should not have to choose between these two things.”

DeLauro, Democratic chair of the House Appropriations Committee, said her legislation addresses the “here and now” issue of the shortage, blaming the crisis on industry monopolies.

“The shortage was caused in large part by corporate greed and consolidation,” DeLauro said. “There are only four manufacturers of infant formula in the United States.”

In this case, DeLauro said, it was Abbott Nutrition that “put profits and production over people, and due to what is a disgraceful lack of oversight is now causing parents and caregivers to struggle to feed their kids.”

Abbott is the largest supplier to the U.S. Department of Agriculture’s Special Supplemental Nutrition Program for Women, Infants and Children (WIC), which provides services to pregnant women, young mothers and their children.

Abbott shut down its formula manufacturing plant in Sturgis, Michigan, on Feb. 17, and voluntarily recalled all Sturgis-produced formula when four infants became ill from bacterial infection and two died after consuming formula produced in the plant.

The House Democrats’ request for $28 million followed Monday’s announcement that the White House reached an agreement with Abbott to reopen its Michigan facility and that the FDA would work to expedite imports of infant formula to address the nationwide shortage.

Commenting on the White House’s actions and the FDA’s guidance for increasing the supply of baby formula, DeLauro said:

“While I welcome action from the FDA to address the infant formula shortage, I continue to echo my concerns about safety.

“We cannot make a false choice between safety and supply. I am disappointed that these actions do not do enough to ensure the formula FDA imports is safe for consumers.

“Instead of purchasing formula from FDA-regulated facilities, the administration is opening the door to any company that self-identifies its formula as ‘safe.’ That is unacceptable.”

However, according to Jonathan H. Adler, a professor at the Case Western Reserve University School of Law, European-made formula may be perfectly safe and produced in accordance with European standards that are at least as stringent as U.S. health and safety requirements, but prevented from being imported because the FDA has not reviewed and approved what is printed on the package — a costly and time-consuming process for producers.

DeLauro’s office said the bill seeks to “prevent fraudulent products from being placed on shelves and to help acquire better data on the infant formula marketplace,” bolster the FDA inspection staff and “strengthen the workforce focused on formula issues.”

“While we have more work to do to get to the bottom of serious safety concerns at an Abbott facility and the FDA’s failure to address them with any sense of urgency, this bill is the first step to help restock shelves and end this shortage,” DeLauro said.

The  House Oversight and Reform Committee last week launched an investigation into the baby formula shortage.

The committee has asked the largest domestic manufacturers to provide documentation and information by May 26 about the steps they are taking to alleviate the crisis.

Specifically, the committee is seeking documents from Abbott relating to the conditions at its Michigan infant formula production plant.

In October 2021, a whistleblower submitted a report to the FDA alleging numerous health and safety compliance issues at the Michigan plant.

Yet it was months before the FDA conducted a formal inspection of Abbott’s facilities.

Commenting on this, DeLauro said:

“I am deeply concerned about the practices at this Abbott facility and their apparent failure to implement and enforce internal controls at this facility. We need to know exactly who in the company was aware of this failure and the alleged attempts to hide this information from the FDA.

“I am equally concerned that the FDA reacted far too slowly to this report. The report was submitted to the FDA on October 20, 2021… According to news reports, FDA did not inspect the plant in person until January 31, 2022, and the recall was not issued until February 17, 2022.”

The disclosure document was sent to top food safety officials and other leaders at the FDA in October 2021, including then-acting Commissioner Janet Woodcock, Susan Mayne, director of the Center for Food Safety and Applied Nutrition, Judy McMeekin, associate commissioner for Regulatory Affairs, and Catherine Hermsen, assistant commissioner of the agency’s Office of Criminal Investigations.

“We know there have been questions about the timeline related to the Abbott Nutrition infant formula recall. However, this remains an open investigation with many moving parts … We are continuing to investigate and will continue to update our consumer alert should additional consumer safety information become available.”

According to Open Secrets, Abbott Laboratories, parent company of Abbott Nutrition, employs at least 36 lobbyists and so far in 2022 spent $970,000 on lobbying activities.

In March 2014, the International Formula Council (IFC) wrote a letter to FDA officials requesting more time to respond to the proposed rules.

The IFC is an association of manufacturers and marketers of formulated nutrition products, including infant formulas and adult nutritionals. Its members are based mostly in North America.

In the letter, the authors said the FDA’s cost-benefit analysis “significantly overestimates the expected annual incidence of Cronobacter infection” by using “outdated data.”

The infant formula representatives asked for 30-45 additional days to review the proposed rule changes that would increase safety and quality production standards.

In June 2014, the FDA released an interim final proposal that responded favorably to some of the infant formula industry’s concerns, according to The Intercept.

The new rules reduced the frequency of stability testing for new baby formulas from every three months to every four months.

The rules also gave companies leeway to shirk testing if “new infant formula will likely not differ from the stability of formulas with similar composition, processing, and packaging for which there are extensive stability data,” reported The Intercept.

A few months later, the IFC petitioned the FDA to revise the safety manufacturing rules by lowering the standards even more.

The petitioners complained compliance costs for enacting the increased safety protocols would exceed $20 million a year.

Additionally, they argued that frequent testing of nutritional content was unnecessary because “infant formula manufacturers have accumulated extensive data from their stability programs sufficient to characterize the nutrient stability in their products over time.”

Despite the shut-down of its Sturgis plant and infant formula recall, Abbott Nutrition continues to report record-high profits.

The revenues are largely generated by its COVID-19 diagnostic product line, which brought in $3.3 billion in quarterly sales, and adult nutritionals, according to Nasdaq.  Abbott’s large diagnostics segment has been its main growth driver.

“Abbott easily recouped its lost revenue from the nutritionals segment in other business areas. Overall company quarterly revenue was $11.9 billion, a 13.8% increase from Q1 2021.”

The company’s CEO Robert Ford in late April expressed confidence that the need for Abbott’s testing products would likely continue.