How much longer can our government continue to hide the global climate engineering assault in plain sight? How much longer will populations continue to blindly accept the official government narrative of lies and denial in regard to the clearly visible and rationally undeniable ongoing geoengineering operations? How is it possible for the power structure to create and maintain the official denial of fully deployed climate intervention programs? By completely controlling the flow of information, including the weather forecasts themselves. 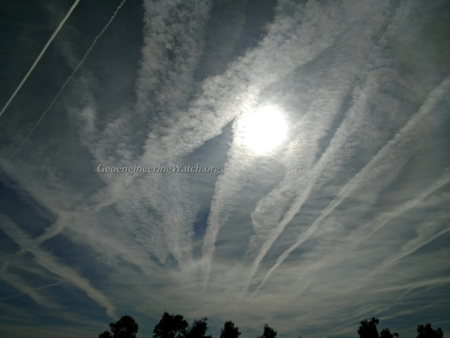 GeoengineeringWatch.org and Stop Geoengineering Minnesota are relentlessly continuing with our legal efforts to force disclosure of the ongoing illegal climate engineering operations. The statement below was made by the lead attorney for our Legal Alliance to Stop Geoengineering, Julio Gomez, Esq. The statement is a response to a handful of National Oceanic and Atmospheric Administration (NOAA) documents that have finally been released to us as a direct result of the lawsuit that we filed to force NOAA to release the information. Though thousands of documents have been promised for release, to date only a few have actually been disclosed and received. The documents we have been able to acquire make it clear that the US government is doing all they can to completely control weather forecasts all the way down to the local level. Why? So that forecasts are based on the scheduled weather produced by the climate engineering operations, not by nature. In order to help hide the ongoing climate engineering crimes, the government is desperate to enforce consistent and completely controlled weather “forecasts”.

On the most recent scheduled date for NOAA document releases to our attorneys, not a single additional document was produced by NOAA (in spite of their legal obligation to do so). Public pressure to disclose information must be brought to bear on our so called government and all the agencies that our government controls, like NOAA.  Awakening populations to what is occurring in our skies is the great imperative, this effort will require all of us. If we can reach a critical mass of awareness, we can alter the equation in the right direction. GeoengineeringWatch.org and Stop Geoengineering Minnesota will continue with our legal efforts to force disclosure of the ongoing geoengineering operations, more updates to come. Help us in the critical effort to sound the alarm, help us to share credible data, make your voice heard.

Rebeccs: You have done a lot of research. TY for posting....
Susu Lespier: I read the whole 10 pages, I thank you for being c...
James McAndrew: Here in California, the indoor masking mandates ar...
Thomas Pickering: https://strangerinajewishworld.blogspot.com/2021/0...
Linda: Yes, I agree with previous comments. is this onli...
Ryan Pelech: You are the deluded one. Want to talk about wast...
Jane M Dopp: I am located in Minneapolis MN and have others int...
Jane M Dopp: I have been trying to get information on the World...
Ralph Fucetola: That URL should point here: https://drrimatruthre...
Bruce Porter: Got a 502 bad gateway on GeneralBertSpeaks.com...