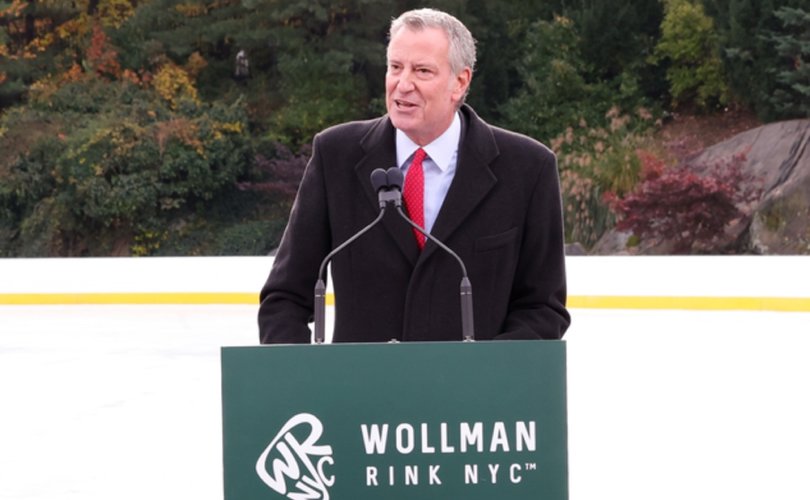 Outgoing New York City Mayor Bill de Blasio made the announcement Monday morning, stating the new rules requiring all New Yorkers to get two shots instead of one, and forcing children to present proof of vaccination will take effect December 14. New Yorkers could previously be “partially vaccinated” with only one shot to access restaurants.

The private sector employee mandate will be enforced just after Christmas, on December 27.

The moves come just days after the city issued a new requirement to force employees of private religious schools – including Catholic schools and Jewish yeshivas – to get the jab, a decision which has drawn intense pushback from religious New Yorkers who have strongly resisted lockdowns, restrictions, and injection mandates.

Catholic and Jewish leaders immediately penned a letter opposing the new rule, arguing the requirement could be “devastating to our schools and the children they serve” if unvaccinated teachers are fired for refusing to get the abortion-tainted shots.

The coercive new measures also far exceed President Joe Biden’s attempted mandate requiring businesses with 100 or more employees to force their workers to get the jab, since New York’s requirement extends to all businesses regardless of the number of employees.

Biden’s mandate was stalled by the U.S. Fifth Circuit Court of Appeals just two days after it was published, and continues to be blocked in the courts.

Set to take effect in just three weeks, New York’s private sector employee mandate provides little time for unvaccinated employees with religious, conscientious, or medical objections to the experimental injections to request an exemption from the requirement, and could put many out of work in the middle of the holiday season.

In his comments Monday de Blasio referred to the new measures as a “preemptive strike” against the “Omicron” variant of COVID-19, which appears to be more transmissible than previous iterations of the virus but causes “extremely mild” symptoms, according to the South African doctor who first raised the alarm about the new variant.

“NYC is a global leader when it comes to COVID-19 recovery,” de Blasio said. “We’ve proven that with vaccine mandates and incentives, we can beat this virus. Now we’re taking another step towards the future — a private sector employee vaccine mandate. Together we can save lives and move forward.”

It’s unclear what scientific rationale backs the move to increasingly nudge unvaccinated New Yorkers out of public life, since there is strong evidence that the “vaccinated” are just as likely to carry and transmit the virus as the unvaccinated. Meanwhile, states like Florida which have not imposed sweeping mandates are reporting decreased numbers of COVID-19 infection.

Broadening the vaccine passport scheme to include young children ages five to 11, meanwhile, comes in spite of the fact that children face extremely low risk from COVID-19 and could be seriously harmed by the vaccines themselves.

Dr. Robert Malone, inventor of the mRNA technology employed by the Pfizer and Moderna vaccines has suggested that inoculating 28 million U.S. children five to 11 years old could lead to “1,000 or more excess deaths” while the risk from COVID-19 for healthy children is “about zero” and appears to be lower than the seasonal flu.

Many Americans who have refused to get the experimental shots express concern that the vaccines have not been sufficiently studied for negative effects given their accelerated clinical trials, and some harbor ethical reservations about the use of cells from aborted babies in their development. Still others simply consider them unnecessary given COVID-19’s high survivability among most groups, low risk of asymptomatic spread, and research indicating that post-infection natural immunity is equally protective against reinfection.

The U.S. Centers for Disease Control and Prevention (CDC) reports a COVID-19 infection survival rate of greater than 99.95% for those under age 50.