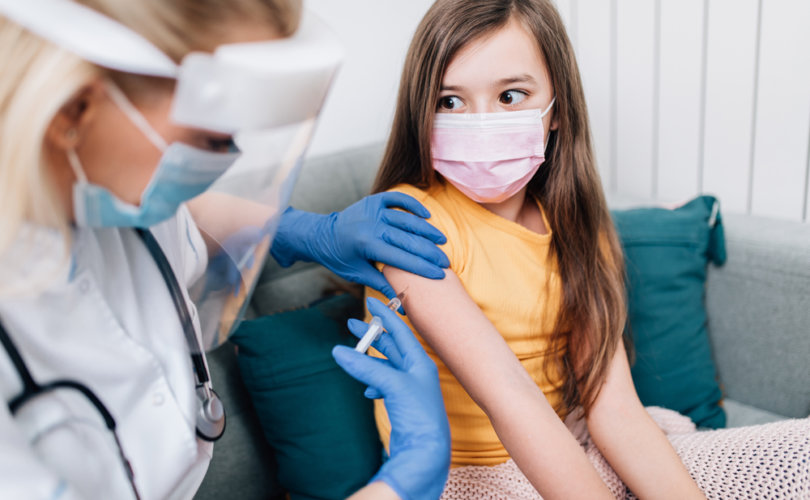 (LifeSiteNews) — An Ontario Superior Court Judge has sided with a mother who sought to protect her children from being jabbed with the experimental COVID jab against their will, and acknowledged that children can be harmed by the jabs.

The Honorable Mr. Justice Alex Pazaratz offered his judgement on February 22 regarding a Family Court case between J.N. and C.G. with Court File No.: 987/18 where the father wanted to have his kids jabbed with the COVID shot and sought to prove the mother was “perpetuating COVID-related conspiracy theories and vaccine hesitancy” to the children. The children, who were identified as L.E.G. and M.D.G., are 10 and 12 years old.

It was the father’s opinion that the mother should do what Canadian health officials have recommended, but the judge disagreed with the father’s reasoning and offered a scathing critique of his arguments and the state of free expression in Canada.

“When did it become illegal to ask questions?” Justice Pazaratz wrote. “Especially in the courtroom?”

He began the judgement by asking if the term “‘misinformation’ is even a real word … Or has it become a crass, self-serving tool to pre-empt scrutiny and discredit your opponent?”

He castigated the use of the term “misinformation” and called its usage “childish” and “sinister.”

The judge did not mention Prime Minister Justin Trudeau by name, but called foul on the rhetoric that Trudeau has used: “How did we lower our guard and let the words ‘unacceptable beliefs’ get paired together? In a democracy? On the Scales of Justice?”

The demonizing and punishment of “anyone who disagrees … [drives] polarization, disrespect, and simmering anger …” He called this tactic an “odious trend … rapidly corrupting modern social discourse,” that “seems to be working for politicians.”

Considering the statements and evidence put forth by both parents, Pazarats wrote: “The mother’s evidence focused entirely on the medical and scientific issues.”

He acknowledged in his ruling the list of potential side effects for children by citing data about side-effects related to the Pfizer jab: “Myocarditis (inflammation of the heart muscle) and pericarditis (inflammation of the lining outside the heart) have occurred in some people who have received the Pfizer-BioNTech COVID-19 Vaccine. In most of these people, symptoms began within a few days following receipt of the second dose of the Pfizer-BioNTech COVID-19 Vaccine.”

“It’s very hard to fault a parent for being worried about such an ominous list of potentially very serious side effects,” he wrote.

He contrasted the mother’s evidence-based concerns with those of the father. “[T]he father focussed extensively on labelling and discrediting the mother as a person, in a dismissive attempt to argue that her views aren’t worthy of consideration.”

The judge provided a summary of the father’s affidavits, which were mostly bits of information concerning her affiliation with the People’s Party of Canada.

“How is any of this relevant?” asked the judge. “Have we reached the stage where parental rights are going to be decided based on what political party you belong to?”

“Even though the father may not admit it, this is still a free country and people can say what they want.”

Pazaratz intimated that this sort of mentality has even found its way into the court room: “We’re seeing more and more of this type of intolerance, vilification and dismissive character assassination in family court. Presumably we’re seeing it inside the courtroom because it’s rampant outside the courtroom.”

The crux of the dispute between the parents, according to the judge, is that “[b]oth children have sufficient age, intelligence, maturity and independence of thought to understand the issue and formulate their own views, feelings, comfort level, questions, and fears about what should or should not happen to their bodies.”

The judge contrasted the information provided by both parents, and clearly sided with the mother’s submission over the father’s. While the judge did not pick sides concerning whether or not COVID jabs are good for kids — which he made clear is not his job — he evaluated the types of arguments the parents made and found the mother’s to be measured and insightful.

The mother submitted articles and studies that cited COVID experts Dr. Robert Malone and Dr. Peter McCullough. About the two doctors he said that due to their credentials, they “can hardly be dismissed as a crackpot or fringe …”

“I am not for one moment suggesting that we should presume the mother’s experts are right. But once we determine they’re not crackpots and charlatans, how can we presume that they are wrong? Or that they couldn’t possibly be right about any of their warnings? When children’s lives are at stake, how can we ignore credible warnings?”

The information provided by the father about why he believed his kids should be jabbed against their will was a litany of publications from the provincial and federal government. The judge was not persuaded by this attempt.

Referring to a drug testing scandal that was used in family court for years, he wrote: “Did the Motherisk inquiry teach us nothing about blind deference to ‘experts’?  Thousands of child protection cases were tainted — and lives potentially ruined — because year after year courts routinely accepted and acted upon substance abuse testing which turned out to be incompetent.”

“[T]hroughout history, the people who held government to account have always been regarded as heroes — not subversives. When our government serially pays out billions of dollars to apologize for unthinkable historic violations of human rights and security — how can we possibly presume that today’s government ‘experts’ are infallible?”

Near the end of his scathing critique of blind obedience to government experts and the divisive politicking common in Canada today, he called out the inconsistency of the Canadian government health authorities regarding COVID.

“During the past two years of the pandemic, governments around the world — and within Canada — have constantly changed their health directives about what we should or shouldn’t be doing. What works and what doesn’t,” he wrote. “Government experts sound so sure of themselves in recommending the current vaccines. But they were equally sure when they told us to line up for AstraZeneca. Now they don’t even mention that word … But how can judges take judicial notice of ‘facts’ where there’s no consensus or consistency?”

He finished with a postscript stating: “It’s irrelevant to my decision and it’s none of anyone’s business. But I am fully vaccinated. My choice. I mention this because I am acutely aware of how polarized the world has become. We should all return to discussing the issues rather than making presumptions about one another.”

One thought on “Ontario judge defends mom’s stance not to jab her kids, rebukes blind obedience to gov’t experts”