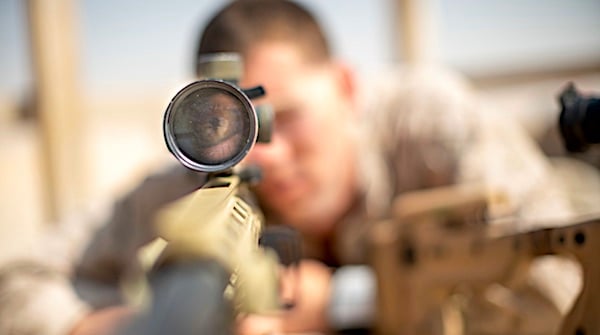 The Pentagon’s explanation for Defense Department data showing an alarming spike in possible vaccine-related illness and injury diagnoses among military personnel in 2021 only raises more questions and concern.

That’s the conclusion of investigative reporter Daniel Horowitz, who has been following the shocking disclosure by a whistleblower of data showing a massive increase in neurological, cardiovascular, oncological and reproductive health issues last year when the vaccines were introduced, compared to the previous five years. 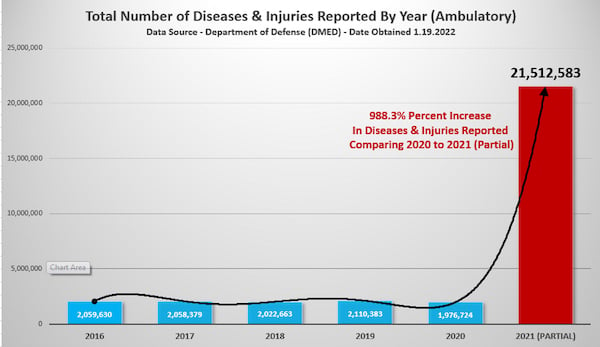 A Pentagon spokesman told Poltifact the dramatic difference can be attributed to a “glitch” in the database, or “data corruption,” insisting 2021 was not an anomaly.

However, as Horowitz pointed out in a column for the Blaze, the Pentagon doesn’t explain why the “true numbers” weren’t in the system for five years, what the numbers in the system represented, and why the 2021 numbers were accurate.

Ultimately, whether the previous five years were similar to 2021, or 2021 was abnormal, one of two things is true, he wrote.

“Either there was mass vaccine injury in the military, or our military has been very unhealthy and the Pentagon completely lost control over epidemiological surveillance of these health issues for years. Either way, this is the story of the year.”

Horowitz spoke with two of the whistleblowers and their attorney, Thomas Renz, who said that since the public disclosure, military public health officials have been adding back random numbers for 2016 through 2020 codes, and “the numbers have exponentially to look as though 2021 was not an abnormal year.”

“This has been done without any transparency, any press release, any statement of narrative, and sloppily in a way that makes the already unbelievable narrative simply impossible to believe,” Horowitz wrote.

“In addition to believing that every epidemiological report for five years was somehow completely tainted with false data — including during the first year of the pandemic itself — we would have to believe that the minute they discovered this from Renz, they suddenly discovered the exact numbers. A five-year mistake fixed overnight!”

After hearing a presentation by Renz at a Jan. 31 roundtable on Capitol Hill with health experts, Sen. Ron Johnson, R-Wis., sent a letter to Department of Defense Secretary Lloyd Austin asking for information regarding vaccine injury among military personnel. Renz, the senator noted, “stated that registered diagnoses for neurological issues increased 10 times from a five-year average of 82,000 to 863,000 in 2021.”

CDC wasn’t alarmed
Significantly, Horowitz pointed out that the Centers for Disease Control and Prevention’s Advisory Committee on Immunization Practices revealed last week that it has been monitoring vaccine safety data from the Defense Department.

That means the CDC saw the data that showed a spike in serious injuries and illnesses in 2021 and did nothing about it.

And further, apparently nobody in the Department of Health and Human Services or the Defense Department thought the data was a “glitch.”

Among the problems with the Defense Department’s new figures — making the number of medical diagnoses nearly the same each year from 2016 to 2021 — is that they don’t reflect the increase in doctor visits due to the COVID-19 pandemic that is seen in other databases.

And drilling down on the data raises further questions.

One is how can a military of healthy young people have such a high baseline of pulmonary embolisms every year?

But Horowitz argued that the cases in the U.S. general population are almost exclusively among the elderly and unhealthy population.

“Soldiers 20 to 25 years old don’t exactly get pulmonary embolisms,” he wrote, suggesting a relationship to the COVID-19 vaccines.

He concluded: “The silence both from the media and congressional members of the House and Senate Armed Services Committees is astounding.”