Perhaps seeing the massive response to the Canadian truckers’ “Freedom Convoy” this weekend – and, more importantly, their prime ministers’ cowering response before he conveniently tested positive for COVID himself just weeks after receiving his booster – was enough to make the provincial government in Quebec rethink its plans to tax any adult who refuses the vaccine. 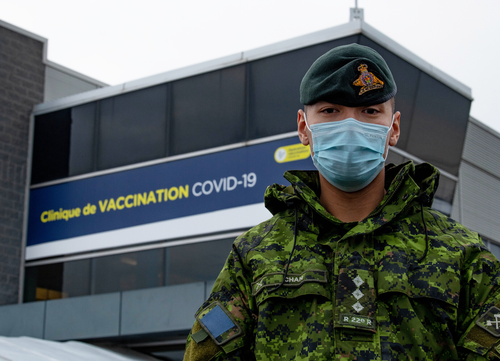 Plans for the “health tax” have reportedly been scrapped, according to Francois Legault, the premier of the French-speaking province, who made the announcement during a news conference earlier on Tuesday. Even Legault acknowledged that the planned tax had “deeply divided Quebecers.”

“Right now we have to build bridges,” he added. “To move Quebec forward in a calm social climate, I am announcing that the government will not introduce this bill on the health contribution.”

In early January, Legault had announced plans to tax residents who had not yet taken the COVID vaccine, citing a “burden” they were placing on the province’s health-care networks.

“Those who refuse to receive their first dose in the coming weeks will have to pay a new health contribution,” Legault said at the time. “I know the situation is tough, but we can get through this together. We need to focus our efforts on two things: Getting the first, second, and third doses of vaccine and reducing our contacts, especially with older people.”

As a reminder, Quebec has faced levels of oppression and encroachment on personal liberty that are unmatched anywhere outside of China. /p>

Last week, Quebec’s Health Ministry required “anyone without a vaccination passport must be accompanied at all times by a store employee and cannot purchase products other than those related to the pharmaceutical service they are receiving.”

While MSM reports didn’t mention them until lower in the story, it’s clear the reaction to the Canadian truckers, who held a “Freedom rally” in Ottawa over the weekend, likely contributed to the governor’s decision.

Of course, public opinion polling has shown that a majority of Canadians want all COVID restrictions removed, as the Epoch Times has reported.

Meanwhile, RCMP units have reportedly been called in to arrest truckers blocking the border between the US and Canada in Alberta, according to the CBC. Police are reportedly moving in ready to make arrests and seize equipment.

Update (1600ET): The RCMP has reportedly started with “enforcement actions

Although some local towing companies have reportedly refused service.

Monday’s announcement marked the second time the Quebec government has walked back public health measures meant to slow the spread of the coronavirus. It also nixed compulsory inoculations for all health care workers last year fearing it would lead to thousands of nurses quitting their jobs, worsening an already severe worker shortage in the sector.