Breaking
FDA ATTEMPTING TO
KILL HOMEOPATHY [HERBS NEXT!]
IN ILLEGAL ACTION WE MUST STOP!

The UK’s National Health “Service” used to run special homeopathic hospitals and herbal dispensaries. Not any more, now the “one payer” will no longer pay for either and they are being closed. [1]

Unsurprisingly, the FDA is following suit, despite the fact that Homeopathy and the US Homeopathic Pharmacopoeia (USHP) are protected by specific statutes in the US.

Did Health Freedom end when 2017 made its exit? Yes, if the FDA has its way!

Bottom Line: If you are ready to take action to protect natural remedies, read on…

This past year the DEA and the FDA came out publicly saying, for example, that Cannabidiol, CBD, a neurotransmitter produced by mammalian (including human) bodies, was not a lawful nutrient, although the agencies have stopped short of raiding health food stores [as FDA used to do in the 1990s, before the Dietary Supplement Health and Education Act (DSHEA)] to enforce their dictate. [2]

Right now, although there is a century of laws protecting homeopathy, FDA is attacking homeopathy to “protect” you. They are the government and they are here to “help” — Big Pharma.

On December 18th of this past year FDA issued new regulations that attack homeopathic oral and injectable remedies despite the fact that they are protected by long-standing law. This blatant attack on your health freedom choices is part of a long-term, well-financed conspiracy and, sadly, comes as no surprise. [3]

On your behalf we told FDA, when they started their “regulatory review” of homeopathy to let our natural remedies alone! The attack began “innocently enough” during the previous presidential administration.  FDA asked for comments on how it should “modernize” homeopathy regulations. That’s the government’s first step toward ratcheting-up control.

That’s the step to which we had previously replied, telling them, among other things:

“FDA does not have authority from Congress to interfere with traditional homeopathy, nor does Congress have authority to permit such interference. Individuals have the right, under international humanitarian law binding on the United States, of Informed Consent to exercise their Freedom of Choice in health care without government burdening that fundamental right.” [4]

These new regulations followed similar recent action in the UK by its “one payer” nationalized health care system. The UK National Health “Service” has ended its long-standing history of support for safe, gentle and effective homeopathy and herbalism (the UK even has special homeopathic hospitals and homeopathic/herbal dispensaries) in favor of dangerous, deadly and ineffective pharmaceuticals. This trend for medical tyranny has “crossed the pond” as the FDA has attacked legally protected homeopathy in the USA.

This was done in three steps that I have documented.

First in 2015, when the FDA asked for public comments about regulating homeopathy. That’s when we submitted the comments referenced above. By the way, by submitting comments telling FDA they were acting illegally, we preserved the legal right to complain to the  courts; we preserved “standing to sue.”

Second, as noted in a blog entry I posted January 2017, FDA was toying with the idea of requiring “disclaimers” on homeopathic products, disclaimers not required by the statute that protects homeopathy in the USA [5].

Third, the most recent action, which illegally attempts to treat HPUS standard homeopathic remedies as unapproved pharmaceutical drugs, requiring a “risk/benefit analysis” which will effectively ban many, if not most, homeopathic remedies. This pseudo-scientific analysis starts with the false claim that homeopathic remedies have no benefit and alleges a “risk” that people using such remedies will fail to use Big Pharma’s government approved, dangerous, “side-effect” drugs.

Such a risk! Since government approved drugs are the main cause of preventable death in the USA, what risk? [6]

The natural product industry has two choices: let Big Pharma and the globalists have their way or force them back, step by step.  I am sure that large producers of homeopathic remedies will realize they have no choice but to challenge the regulation. Strong public support for natural remedy freedom will encourage resistance to agency overkill.

Since we have preserved the right to object to this latest FDA action, cooperation between the industry and the health freedom movement during 2018 may be the only way to preserve our access to homeopathy, and, while dodging the FDA’s left punch, we’ll need to watch it’s right arm for the next attack on herbs and other nutrients, like CBDs.

The new President, failing to keep his promise to “drain the swamp” seems to be appointing swamp-creatures to run the FDA and empower it to further attacks!

We must choose to force them back. I know you will want to do so, too.

FIRST — To start, use and share this Facebook Poll link to make your opinion about the FDA attack heard:   https://fans.vote/ACsU7n6KLLo 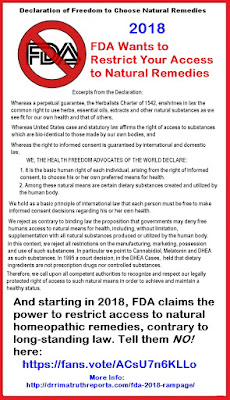 THIRD — Then take these steps:

2. Show your support directly to the Natural Solutions Foundation as a potential litigant against the FDA (not tax exempt) here:  https://www.nsfmarketplace.com/product/support-the-work-of-natural-solutions/

3. Contact me directly if you or your company want to be part of the advocacy and litigation that will likely be needed to stop this latest FDA outrage. Our half century of health freedom advocacy positions us to coordinate this urgent action.  We need your support — email me here: ralph.fucetola@usa.net

[1]  http://www.telegraph.co.uk/news/2017/07/21/nhs-ban-homeopathy-herbal-medicine-misuse-resources/
[2] http://vitaminlawyerhealthfreedom.blogspot.com/2017/01/ftc-wants-disclaimers-on-homeopathy.htm
[3] https://www.fda.gov/ucm/groups/fdagov-public/@fdagov-drugs-gen/documents/document/ucm589373.pdf
[4]  We told FDA to leave our natural remedies alone; when they started this latest attack on Homeopathy, back in 2015, here are the comments I filed with FDA: http://vitaminlawyerhealthfreedom.blogspot.com/2015/06/comments-to-fda-re-homeopathy-fda-has.html
[5] http://www.hpus.com/legal-status.php
[6] http://www.webdc.com/pdfs/deathbymedicine.pdf