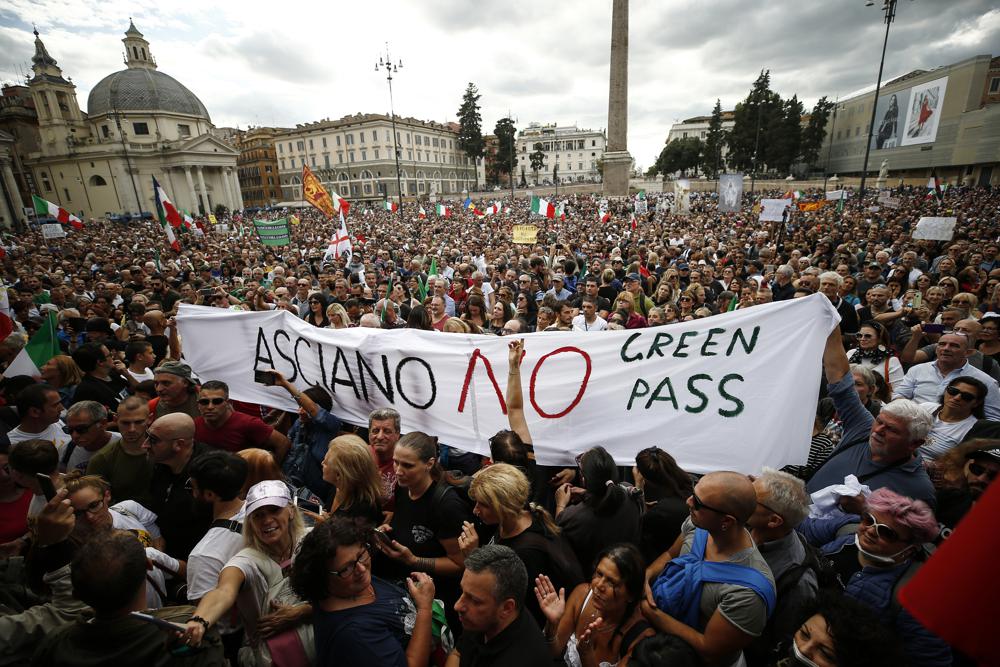 People gather in Piazza del Popolo square during a protest, in Rome, Saturday, Oct. 9, 2021. Thousands of demonstrators protested Saturday in Rome against the COVID-19 health pass that Italian workers, both the public and private sectors, must display to access their workplaces from Oct. 15 under a government decree. (Cecilia Fabiano/LaPresse via AP)

ROME (AP) — Thousands of demonstrators marched down Rome’s famous Via Veneto and other streets on Saturday, some smashing their way into a union office and clashing with police as they protested Italy’s new “Green Pass” vaccination requirement for employees to enter their offices.

The certification is mandatory beginning on Oct. 15 and applies to public and private workplaces. Both employees and employers risk fines if they don’t comply. Public sector workers can be suspended if they show up five times without a Green Pass. The pass is already required in Italy to enter museums, theaters, gyms and indoor restaurants, as well as to take long-distance trains and buses or domestic flights.

The passes show that a person has had least one COVID-19 vaccine dose, or recovered from the virus in the last six months, or has tested negative in the last 48 hours.

The protesters first held a noisy, authorized protest Saturday in Rome’s Piazza Del Popolo. Then they left the vast square and clashed with police as they headed through Villa Borghese Park and down the Via Veneto in an unauthorized march.

A few hundred protesters broke off and headed down another street in Rome’s historic main shopping district that ends near Premier Mario Draghi’s office in Chigi Palace. Police formed a line, aided by police vans, and sprayed water to thwart access to the seat of the Italian government.

Police swung at some demonstrators with batons. Many protesters in the front lines outside Chigi Palace raised their arms to indicate non-violence as they faced off with police. Others raised clenched fists or waved Italian flags and shouted “Freedom!” One banner read “Get your hands off (our) work.”

Some protesters, armed with sticks and metal bars, smashed their way into the headquarters of CGIL, a left-leaning union, and trashed its office. Italy’s main labor federations have supported the Green Pass requirement as a way to keep factories and other workplaces operating safely during the pandemic, which has battered the Italian economy.

Draghi, meanwhile, pledged to go ahead with the government’s vaccination campaign.

“The right to demonstrate one’s ideas can never degenerate into acts of aggression and intimidation,” Draghi said in a statement. He denounced as unacceptable any kind of intimidation against unions, whom he described as “a fundamental garrison of democracy.”

“We won’t let ourselves be intimidated,″ tweeted Federico D’Inca, the minister for parliamentary relations from the populist 5-Star Movement.

Draghi’s government has credited the Green Pass requirement for workplaces for a surge of recent vaccinations. As of Saturday, 80% of people 12 and older in Italy — those eligible for a COVID-19 vaccine shot — have been fully vaccinated.

“Lengthen the minimum term of the Green Pass from 48 to 72 hours,” tweeted Salvini, calling that a step to “avoid chaos.”