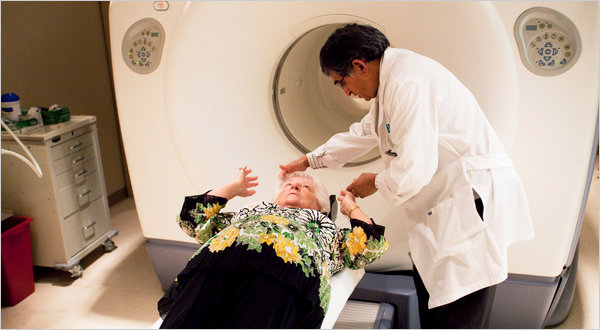 They say that when people are dying, the last of the five senses to leave them is smell. People who have experienced near-death in an operating room or in an accident often describe in vivid detail smells from childhood: mom’s baking bread, the smell of woodsmoke from a fire, cinnamon apple cider.

That’s why it is perhaps fitting that one of a pair of promising new studies that hopes to one day provide an early, non-invasive test to detect Alzheimer’s relies on the sense of smell to make its prediction. The second test relies on the eyes to predict alzheimer’s but first the smell test.

An international meeting on Alzheimer’s was the site where researchers from Columbia University revealed the results of their study, in which a group of participants aged 60 or older were asked to take a standard odor test.

What they found was that the people who did most poorly on the test were the ones who were more likely to already have, or to go on to develop thinking and memory problems. And the most exciting thing about the study is that it holds promise that one day, a simple, non-invasive, standardized test relying on scent could be available at any doctor’s office.

“The whole idea is to create tests that a general clinician can use in an office setting,” said Dr. William Kreisl of Columbia University.

Usually, Alzheimer’s tests are expensive and require a lot of work: PET scans and spinal taps are de rigeur at the moment.

The idea for the smell test grew out of the observation that Alzheimer’s patients often report that food has lost its flavor, and researchers have concluded that the reason for this is they have lost some of their sense of smell. This led Keisl and his colleagues to hypothesize that Alzheimer’s affects the are of the brain responsible for processing odor signals from the nose in its’ earliest stages.

Another non-invasive test has come out of research conducted at the University of Minnesota, in which older rats with early stages of Alzheimer’s were found to have retinas that give off less of a reflection than their Alzheimer’s-free counterparts.

It is incredible to imagine a pair of simple, cheap and effective tests for alzheimer’s that might easily be performed in tandem at a doctor’s office, early on in the aging process and able to catch signs of Alzheimer’s at its very earliest stages.

While there is still no cure for the disease, knowing what is happening to oneself or to one’s loved one could provide immense comfort, and allow for preparations to be made to help them better deal with what is coming.
###

Alzheimer’s May Soon Be Detected with an Eye Exam