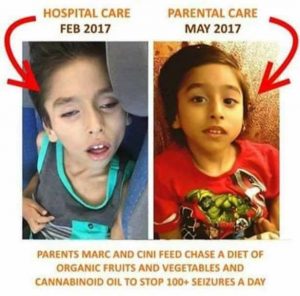 On May 19, 2017, 4-year-old Chase Walker-Stevens, a vaccine-injured child with severe cerebral palsy and epilepsy in Australia, was forcibly removed from his parents because they had chosen to wean their son off all pharmaceutical products and treat him holistically.

In a video taken minutes after Chase was stolen, his father, Marc Stevens, wept as he told friends and supporters how police had stormed into the hospital, locked him into the bathroom and snatched Chase from his mother’s arms, before arresting her.

During the distressing six-minute footage of events, we can witness for ourselves how supporters of the family are pepper sprayed by the police as they watch the child’s mother, Cini, being dragged from the hospital kicking and screaming.

According to reports, Chase had a perfectly normal birth. He received his initial vitamin K shot a few minutes later and within two hours, had begun to suffer seizures. The doctor who examined him at the time diagnosed anaphylaxis, a severe life-threatening allergic reaction to the vitamin K injection.

In a statement written by a representative from the Australian Vaccine Network (AVN), Ms. Meryl Dorey, Chase’s seizures worsened after he received his vaccinations.

Chase was vaccinated according to the vaccination schedule, with increasing seizure activity and hospitalization after every dose of vaccine that was administered. To date he has, received 27 out of 31 scheduled vaccines.

Since receiving his vaccinations, Chase has been diagnosed with an uncontrollable seizure disorder and cerebral palsy. According to newspaper reports, until recently, he was suffering from approximately 100 seizures a day, which had caused him to suffer significant brain damage.

Mother believes that the hospital 100% harmed her child.

See video: ‘They almost killed him’: Mum blasts hospital after taking son away

Since receiving his vaccinations, Chase has been diagnosed with an uncontrollable seizure disorder and cerebral palsy. Photo from Facebook.

What is really shocking about this case is the fact that governments have known that vaccinations can cause epilepsy since the 1970s. In 1979, Dr. D. Neary, M.D., M.R., C.P., a Consultant Lecturer of Neurology, wrote a letter to the Department of Health in the UK, which stated:

I have had an increasing number of patients bringing their epileptic children and asking whether the whooping cough vaccine played a part in their disorder. Could you give me as many details as possible about the present legal situation regards this group and the type of information they require in order to prove relationship between the vaccination and the disorder.

I would be most grateful if you could give this information. Supplied for Education and Information only under FOI.

His letter clearly identified that the DPT vaccination had been a concern from as far back as the 1970s and his fears were further confirmed by professionals in another report that had been written around the same time, titled: Views from the Advisory Panel. The report, written to advise the UK government of the dangers of vaccination, stated:

However, from a careful scrutiny of the data, it was felt that 3 clinical patterns could be discerned.

Mental retardation followed in all but 3 of the 50 cases.

See report here. (Supplied for Education and Information only under FOI.)

In 1997, a paper titled The Tainted History of the DPT, author Dr. Harold Stearley stated that:

There’s no question that DPT vaccinations save lives; they have lowered the annual pertussis deaths from about 1000 annually to less than ten. Unfortunately, as reported by the National Vaccine Information Center (NVIC), the form of the vaccine used and sanctioned by the Centers for Disease Control also kills as many as 900 children per year, and leaves one of every 62,000 children immunized with permanent brain damage. Are those acceptable risks?

In 1977, British researcher Dr. Gordon T. Stewart, of the Department of Community Medicine at the University of Glasgow, documented adverse reactions to DPT vaccine and evaluated the benefit to risk ratio for children in the United Kingdom. His research demonstrated that 1 of every 54,000 children receiving the vaccine suffered encephalopathy (brain dysfunction) with rare instances of mental retardation ensuing. Other symptoms included fits of screaming, unresponsiveness, shock, vomiting, localized paralysis, and convulsions.

He determined that adverse events were severely under-reported or overlooked, that no protection from the disease was demonstrable in infants, and that claims by official bodies that risks of whooping-cough exceeded those of vaccination were very questionable. He estimated the risk of transient brain damage and mental defect to occur in 1 out of every 10,000 vaccinated, and risk for permanent brain damage to occur in 1 out of every 20,000 to 60,000 vaccinated.

Chase’s Parents Told to Go Home and Plan His Funeral

The AVN told Medical Kidnap that in April 2014, Chase was hospitalized with a severe infection after his final round of vaccinations. His parents were told by doctors at the High Dependency Unit at the Lady Cilento Hospital, in Brisbane, to go home and plan his funeral.

This information was reiterated in an excellent article published by the Australian National Review, which stated that:

A mere 2 months after his last lot of vaccines, Chase was diagnosed with a chest infection and re-admitted to hospital where he spent a week trying to recover in the High Dependency Unit. According to Cini, at this time, doctors told her and Marc that they ‘…should go home and plan a funeral.’ Chase thankfully pulled through but it was here that Cini first started to mistrust the advice of her doctors and together, Marc and Cini decided Chase would have no more vaccines.” (Own emphasis)

Until this point, Chase had been receiving all the medical attention deemed appropriate by medical experts. However, not content to accept their son’s death sentence from doctors, Chase’s parents, Marc and Jacinda (Cini), chose to change Chase’s diet from the hospital-based formula food Nutrini, which was packed full of toxic ingredients and being fed to their son artificially, directly through a peg inserted into his stomach, to a diet of pureed organic food.

The toxic ingredients of Nutrini are:

Furthermore, due to the fact that Chase had been left in an extremely poor condition by the hospital, his parents had also chosen to wean him off his seizure medications and instead give their son the legal treatment of cannabis oil, provided by Dr. Andrew Katelaris.

Dr. Katelaris’ treatment certainly appeared to have been a success, because, according to reports, Chase went from suffering 100 seizures a day, to having no more than four seizures a week. His parents told reporters that he was now smiling, laughing, trying to speak and was attempting to hold objects for the first time since receiving his 18-month vaccines.

This fact was reported in the Australian National Review report, which stated:

At the time, Chase was still on his seizure medication though he was still suffering with up to 100 seizures per day. At this point, Cini and Marc opted to try medicinal cannabis oil after hearing the success other parents had experienced. Within a matter of days, his seizures decreased. Despite the fact that they weaned him off of his pharmaceuticals, Chase’s seizures completely disappeared and to date, Chase’s seizures have reduced down to just 4 per week but he can go up to 50 days seizure free if his bowel movements are regular and his parents can get him to burp. He also started smiling, laughing, attempting to talk, holding his head up, following his mother’s gaze and trying to grasp objects, something his parents observed he had not done since his last lot of vaccines at 20 months of age.

While any sane person might think the hospital would be thrilled at the remarkable improvements in Chase’s health, Cini and Marc instead entered into a bitter custody battle with the Lady Cilento Hospital and the Department of Communities, Child Safety and Disability Services. The hospital staff were claiming that Chase was at risk of cardiac arrest because he had lost some weight and was not receiving his prescribed cocktail of toxins via his peg. In order to claim that Chase was underweight, the hospital compared Chase’s weight to that of a regular 4-year old boy. Given Chase was wheelchair bound and peg fed, it would be illogical to believe his weight should be the same as a typically developing boy of his age.

When Peter, the child’s advocate and a former lawyer, presented a chart for 4-year old cerebral palsy boys showing that in fact Chase was sitting at about the average weight for his condition, the hospital completely dismissed him. It was the hospitals intent that Chase would return to being fed Nutrini, placed back onto his pharmaceutical medication that caused him to be in a constant catatonic state, vaccinated up to date and no longer receive his life saving medical cannabis oil. As anyone could imagine, Cini and Marc did not accept this and so ensued 9 medical kidnapping attempts and 2 court hearings, both of which ruled in favor of the parents. It is easy to see from the before and after photographs that the changes in Chase have been nothing short of a miracle. Photo from Facebook.

It is easy to see from the before and after photographs that the changes in Chase have been nothing short of a miracle. However, despite the wonderful care that Chase’s parents had given to their son and the obvious improvements to their son’s health, these dedicated and loving parents have been treated like criminals.

Maybe this is because these brave parents dared to tell their story during the screening of the Vaxxed film in Maroochydore.

Their story is heartbreaking and tonight, Chase is being looked after by complete strangers in another state, whilst his parents have been kept in the dark as to where their son is.

Cini explained to supporters that:

I don’t know what is happening to my son, all I can think of is pedophiles. My son can’t speak and that is all I can think of, that he is in someone’s care and that something is happening to him and he cannot tell me what happened. I am so scared for my son’s life, that he is on medication that they’re going to give to him and I can’t stomach the feeling in my heart as a parent.

If you would like to support Chase’s parents in their battle to bring their son home, then please sign this petition today.