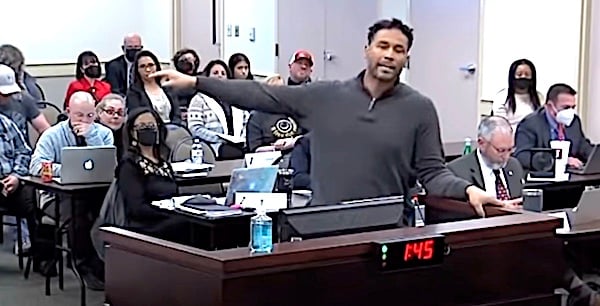 Calling Critical Race Theory a “big fat lie,” a biracial North Carolina father told a local school board that anyone telling his children they are oppressed “based on the color of their skin, would be absolutely wrong and absolutely at war with me.”

A video of the remarks of the father of three, Brian Echevarria, to the Cabarrus County School Board on Feb. 14 went viral on social media.

“I’m biracial, I’m bilingual, I’m multicultural. The fact is, in America, in North Carolina, I can do anything I want and I teach that to my children,” Echevarria said.

“And the person who tells my pecan-color kids that they’re oppressed, based on the color of their skin, would be absolutely wrong and absolutely at war with me.”

Echevarria, who is running for the North Carolina General Assembly, said the debate over CRT and masks in schools across the country has shown that parents are “the most powerful group in the country” and can “drive policy change.”

“The community, I think we recognize, now the political juice has been sucked out of the mask distraction, that we have to move forward,” he said.

Parents, he said, are “taking back the wheel.”

After a revolt from parents, the Cabarrus County School Board voted last week to make masks optional for students. Last year, the voted addressed the CRT controversy with a resolution against teaching discrimination.

“CRT, all of that, the parents don’t want it. It’s a big fat lie,” Echevarria said.

“We know that’s not true because we believe the lives we live,” he said.

“In America, in North Carolina, I can do anything I want and I teach that to my children,” Echevarria said.

One thought on “Viral: Biracial father tells school board CRT is ‘a big fat lie’”