Update (1500ET): While in a normal world this would be beyond satire and ridicule, it is perhaps of no surprise whatsoever that the blame for instigation of the “Freedom Convoy” is already being placed on so-called ‘Russian actors’…

As Brian Lilley writes at The Toronto Sun, “the media in this country is not acting as a neutral observer and conduit for news on this matter, most have decided the trucker convoy is the enemy and are treating it as such. Watch any of the news networks or, more importantly, read the Twitter accounts of supposedly objective journalists, or listen to the contempt in their voices as they ask questions to see that they have clearly taken sides.”

“Apparently, the journalists on Parliament Hill these days think their job is to hold the opposition and not the government to account. It also appears their job to support some protest movements and attack others based on the personal preferences of the journalists.”

The propaganda seems to have reached some, but not others…

In other news, while Trudeau hides in isolation, the Premier of Saskatchewan, a Canadian province that borders the US, calls for an end of the cross-border ban on unvaccinated truckers. 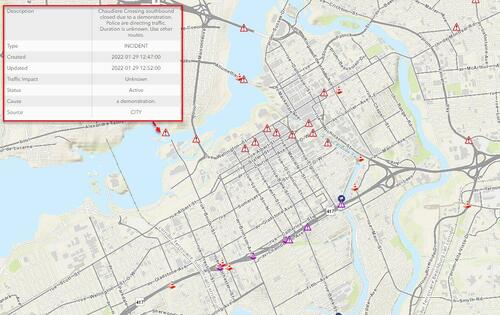 The so-called “Freedom Convoy” – coming from all corners of Canada and even the US, has been traveling all week and is leading the charge in a massive demonstration against government overreach. Truckers from around the world are uniting and staging protests of their own. 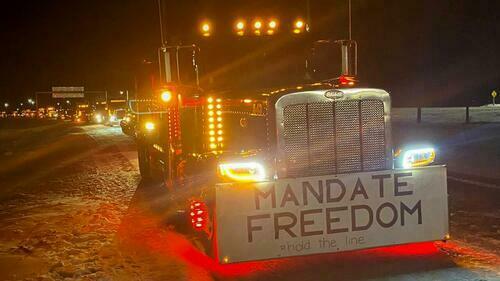 As Enrico Trigoso reports at The Epoch Times, Brian Von D, the administrator at “Convoy to DC 2022” announced that they will “join forces” to ride from California to Washington, adding that “America is next.”

“As [the Canadian convoy] moved from the west to the east, [the American truckers] have been filtering into this convoy, and it is absolutely massive. It is known worldwide, it is the largest thus far,” he said in a live video on Facebook.

He added that dates and planned routes would be released soon on a website and various social media platforms, and a GoFundMe page would only be released on their CONVOY TO DC 2022 Facebook page.

“We’re done with the mandates, were done with the government telling us what to do, we will continue and we will follow just like the rest of the world on these trucker protests, and they will be 100 percent legal, they will abide by the law.”

The Parliamentary Protective Service expects as many as 10,000 protesters this weekend in Ottawa, but that figure could be significantly higher. A day ago, we noted 50,000 trucks in a 70km (43.5 miles) long convoy are headed to the capital.

According to the Guinness Book of World Records, the Freedom Convoy is “the largest parade of trucks” ever in the world.

“I have seen footage from an airplane. It’s impressive.”

The trucker convoy has been arriving in the capital for the past 12 hours. Additional waves of the convoy will arrive later this afternoon.

Prime Minister of Canada Justin Trudeau called the convoy a “small fringe minority” of those who “do not represent the views of Canadians.” Judging by the pictures and videos so far, Trudeau is a liar, and a revolt is underway in the country. Corporate media and government have spent the better part of the week downplaying the convoy ( because they are scared).

On Friday, Trudeau told the Canadian Press that he was worried about the protest turning violent. Organizers of the event have told truckers and anyone else participating in the demonstration to remain peaceful.

CBC said Trudeau and his family left downtown Ottawa on Saturday morning (due to close contact with someone infected with COVID – although he tested negative and triple-jabbed) as the trucker convoy descended on the area. The local news said he left town due to security concerns.

The convoy is expected to bring parts of the metro area to a standstill and block roads in front of parliament until lawmakers repeal a vaccine mandate for truckers hauling freight across the border.