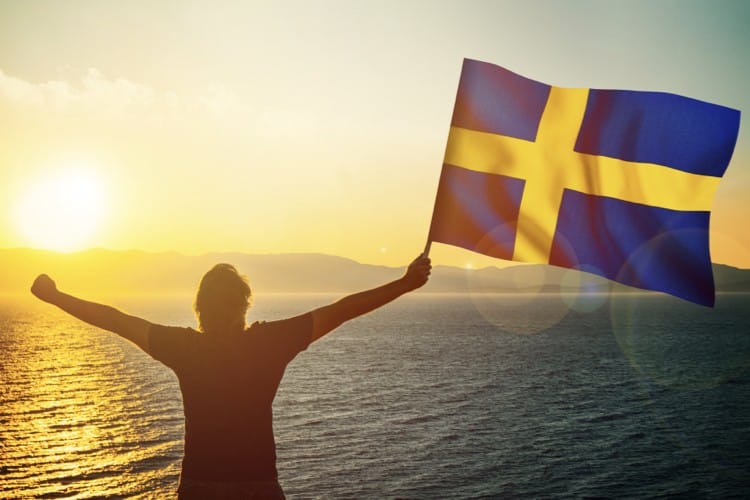 As of Wednesday, Sweden’s seven-day rolling average for China virus deaths was zero. …

Sweden isn’t in the news much right now, for both good and bad reasons. The good reason is that unlike in France, where massive protests and rioting inspired by new anti-coronavirus lockdown measures have made headlines, the Nordic country is peaceful. The bad one is that even though the reason it’s peaceful is because its anti-lockdown strategy has worked, the COVID-panic-porn-obsessed media don’t find this newsworthy. After all, if the masses find out that all the civilization-rending lockdowns and onerous virus restrictions are an exercise in scientific obscurantism, a lot of power-mad politicians could face career destruction.

Here’s the news the opinion cartel finds un-newsworthy: As of Wednesday, Sweden’s seven-day rolling average for China virus deaths was zero (tweet below).

To be precise, Sweden has on occasion curbed restaurant opening hours (I guess the virus only attacks during certain periods of the day) and has at times enforced crowd limits at venues such as shopping malls, but these have been exceptions to the country’s rule of relying on voluntary measures to combat SARS-CoV-2.

This lies in contrast to its European neighbors, which, as the definition of insanity goes, are doing the same thing over and over again while expecting a different result. In France, for example, “government officials have decreed that unvaccinated individuals will no longer be allowed to enter cafes, restaurants, theaters, public transportation and more,” reports the Foundation for Economic Education (FEE). This is despite data indicating that many new China virus cases are among the vaccinated and that the most highly vaccinated nations have the worst COVID infection rates — and warnings that the vaccines may actually be dangerous.

“France’s approach is unique, but it’s just one of many countries around the world imposing new restrictions as fears grow over a new variant of COVID-19,” FEE later writes. “Australia’s recent restrictions have placed half the country under strict lockdown — even though a record 82,000 tests had identified just 111 new coronavirus cases — while restaurants in Portugal are struggling to survive amid newly imposed restrictions.”

In contrast, “Sweden is welcoming tourists,” FEE also informs (unlike Canada, which had its border with the United States closed to “unessential travel” for more than a year). “Businesses and schools are open with almost no restrictions. And as far as masks are concerned, not only is there no mandate in place, Swedish health officials are not even recommending them.”

Of course, we don’t hear much about the above from mainstream media. But this doesn’t mean Sweden isn’t getting some press. Just consider today’s Reuters headline, “COVID-19 on the rise in Swedish cities as Delta outbreaks dominate.”

Thus framing matters without pointing out that having a high infection rate combined with low hospitalization and mortality rates has a great upside — it builds herd immunity — is propagandistic reporting. It is, however, good for ratcheting up fear that will ensure bad policy’s perpetuation.

Sweden’s case is also interesting because, being a cold nation, it should be harder hit by a respiratory disease such as the China virus. Yet it’s joined in this northern-clime boat by North Dakota, which avoided COVID regulations even more assiduously, and which also has managed the disease very well.

Oh, it doesn’t get much press, either.

In fact, “Covid is the first epidemic in history in which the healthy population was locked down, and it is not even that lethal for most people,” notes writer Thomas Lifson, commenting on the matter. “How that happened is a key question for discussion, and of course is almost never even raised in the media. But Sweden’s success in using the common sense, time-tested practice of focusing on the vulnerable and leaving the rest alone is now vindicated, while those countries that failed to build herd immunity as fast continue to suffer, and even redouble their bad bet of locking down.”

But even if one reckons Sweden’s success differently, and even if its China virus numbers change in time, it doesn’t matter. Why?

Because we have no rational choice but to follow its lead. That is to say, we hear much about “following the science.” Well, here’s the science and the facts:

• Data have long shown conclusively that widespread lockdowns not only don’t mitigate China virus spread, but that they actually create a situation in which there’s more death than the pandemic alone would cause (not to mention the economic destruction and psychological distress).

• Studies show that masks, when prescribed for the general population, are at best marginally effective at reducing viral contagion; moreover, they also appear themselves to pose significant health risks.

• The six-foot social-distance prescription is fairly arbitrary and is based on the work of a 19th-century German. Ironically, though, today’s Germany prescribes a social distance of 4.92 feet while the World Health Organization’s figure is 39 inches. Of course, you’re less likely to contract a disease if you remain six feet from others than if you’re closer; you’re even safer if you stay 60 away. You’re safer still if you live isolated in the Yukon.

The point is that we must go on with life. Ours isn’t a Last Man on Earth/Omega Man situation, where a virus exterminates most of humanity and zombies roam the countryside. As renowned COVID physician Dr. Peter McCullough has pointed out, the China virus has always been treatable, and a correct and official SARS-CoV-2 treatment protocol could have saved 85 percent of those who died from the virus. (You can partially thank Anthony Fauci for its lack.)

I have elderly/vulnerable people in my life whom I love with all my heart, and I want to keep them safe. But I know two things: Draconian government measures won’t accomplish this.

And if we continue with the lockdown folly, we won’t have much of a nation left.

This wouldn’t be good for anyone — except maybe the megalomaniacs who may aspire to rule over the ashes of what was once a successful civilization.