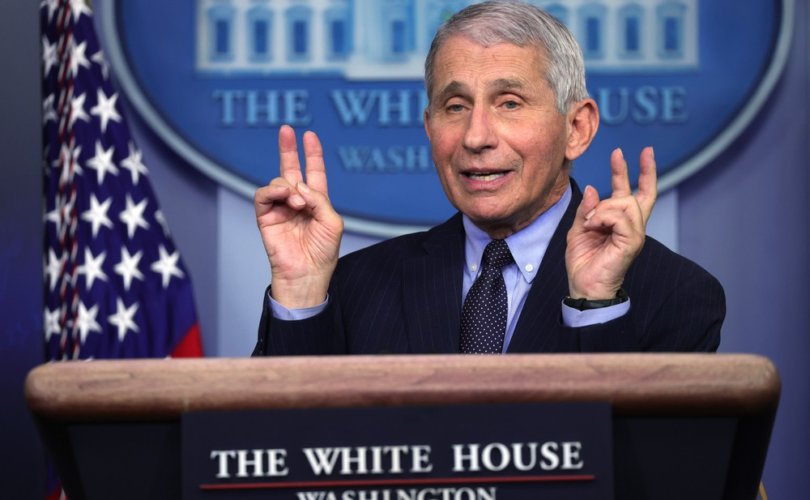 DAVOS, Switzerland (LifeSiteNews) — In a departure from prior comments on the subject, White House COVID-19 czar Dr. Anthony Fauci said the “new normal” for society will eventually entail accepting that COVID will never disappear entirely, but perpetual masking is “out of the question.”

As highlighted by Rebel News, Fauci was speaking Monday at the first-day session of the World Economic Forum. “It’s not going to be that you’re going to eliminate this disease completely,” but “hopefully it will be at such a low level that it doesn’t disrupt our normal social, economic and other interactions with each other,” he said.

“A new normal, I believe, will have a much, much greater attention to the capability of respiratory viruses that spread as they do,” Fauci continued. “I think the new normal will be, I hope, a greater degree of interconnectivity and solidarity throughout the world when we are talking about the possibility of pandemics. I don’t think people are going to be walking around with masks all the time. I mean, I think that’s very much out of the question. That’s not going to be something that the world will accept as being normal.”

Fauci also dismissed the feasibility of continually releasing new vaccines tailored to specific variants. “We really don’t want to get into the ‘whack-a-mole approach’ towards every new variant where it comes out and you all of a sudden have to make a new booster against a particular variant because you’ll be chasing it forever,” he said. “So that’s the reason why one of the things we are really all pushing for is finding out what the mechanisms are that induces a response to a commonality among all of the different real and potential variants that we’re seeing and that can occur.”

Fauci’s comments represent a departure from past remarks suggesting he favored more drastic and permanent behavioral changes in response to the pandemic, such as abolishing handshakes (he later walked back those comments), and that not only masking but “goggles or an eye shield” should become a standard seasonal practice to “not only protect us against COVID-19, but also help protect us against influenza.”

Fauci, a divisive public figure who approved the funding of research that may have led to COVID-19’s development, continues to be a vehement proponent of vaccine mandates and childhood vaccinations for COVID. But his latest downplaying of masks and acknowledgment of the “new normal” may reflect a growing desire on the part of the Biden administration to reframe the pandemic in light of its failure to “shut down the virus,” as President Joe Biden had pledged on the campaign trail.

Over the past two months, several administration figures and their allies have begun to reverse their past positions on masks’ effectiveness, length of isolation for the infected, and the reliability of hospitalization statistics.