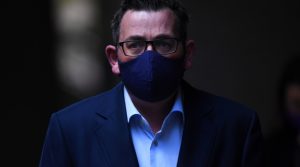 The Orwellian Doublespeak and Doublethink flowing out of the Victorian government authorities is overwhelming to say the least.

At first it was the Premier himself saying not to wear masks. Apparently the public who were scared into submission were panic buying disposable masks. Now Andrews has backflipped.

In a statement released today the Victorian government is now mandating that as of Sunday August 2, 11:59pm anyone leaving their home MUST have a face covering.

However it doesn’t end there. As of 11:59pm tonight a whole host of local government areas fall under greater restrictions.

Basically what they’re telling you is don’t think for yourself. Don’t question our motives. We have the data that justifies our insane and nonsensical rules.

Apparently the virus is so selective it only exists at someone else’s house. Go to dinner with a mate in a restaurant (wearing a mask of course), and you’ll be fine. No virus there.

It’s asinine. Notice how they only mention “the data” when it suits their needs.

There’s plenty of data out there, peer reviewed studies and papers as well as many doctors explaining that masks will do nothing to “stop the spread” which is available to these bureaucrats in government. Not only are they useless in protecting from a virus but harmful to the user under certain circumstances like prolonged use.

Here’s a video of Doctors on the topic…

The statement ends by trying to reassure the masses that this is just a small sacrifice. The smallest of sacrifices in fact. Forget that many people have lost their jobs, their businesses, their livelihoods, their lives through suicide. Forget that they’re the ones making the sacrifices and forget the fact that all the people making these ridiculous rules have made no such sacrifices. It’s business as usual for the bureaucrats. You know, because we need them so much.

So forget everyone who mattered to you. Don’t hug Mum. You know, to save her life. Because big brother says so.

We’ve said it from the start. This isn’t about a virus. It’s about compliance.