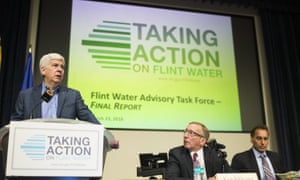 In a move that surprised exactly no one, a taskforce has concluded that the poisoning of the citizens of Flint, Michigan constituted what they termed an “environmental injustice.”

The panel concluded in its 116-page report that the residents of Flint did not “…enjoy the same degree of protection… provided to other communities.” The report also took pains to point out that the majority of residents of Flint are African-American, painting in stark terms that the true and most severe costs of deteriorating environmental standards are always borne first by the poor and minority communities.

Deserving of most of the blame for the two-year water contamination crisis were state officials said the taskforce, including the governor’s office, the state environmental agency and emergency managers who were appointed by Snyder to administer Flint over a four-year stretch. That was the period when fateful key decisions were made that caused the crisis, leading to lead toxicity, an outbreak of Legionnaire’s disease, and tap water in Flint running brackish and foul-smelling.

“Emergency managers made key decisions that contributed to the crisis, from the use of the Flint River to delays in reconnecting to DWSD [Detroit water and sewerage department] once water quality problems were encountered,” the 116-page panel report stated. “Given the demographics of Flint, the implications for environmental injustice cannot be ignored or dismissed.”

The report went on to condemn those same decisions in the strongest terms, calling out the city managers and decision makers as essentially having perpetrated a racially-based environmental crime on the citizens of Flint.

“Flint residents, who are a majority black or African American and among the most impoverished of any metropolitan area in the US, did not enjoy the same degree of protection from environmental and health hazards and that provided to other communities,” the report said.

The task force’s report also revealed that Snyder’s top aides had been aware of concerns with Flint’s water supply for months, long before the governor’s office concluded that the city’s water was unsafe for human consumption. And the real tragedy is that thousands of lives were disrupted and potentially radically shortened due to short-sighted, financially based decisions.

Indeed, a state-appointed emergency manager looking to save money implemented the city’s switch from Lake Huron water to a local river, resulting in the contamination that has thus far the state of Michigan $70 million to clean up.

It’s a pattern we see repeated over and over: we will save money if we change the water system/spray crops with pesticides and herbicides/industrialize farming, etc., etc. And when brave activists and journalists point out how these “cost-saving measures” end up costing us plenty in terms of health and damage to the environment, the next step is to say “well now it’s just too expensive to change it back.”

Another point the taskforce made clear was that the fact of Flint residents drinking lead-contaminated water would never have come out without the persistent efforts of journalists and activists.

That’s us, friends. And Flint is far from the only health and environmental disaster out there. Keep reading, keep vigilant, keep active. For all our sakes. This report is a good win for the good guys, but the war is hardly over.