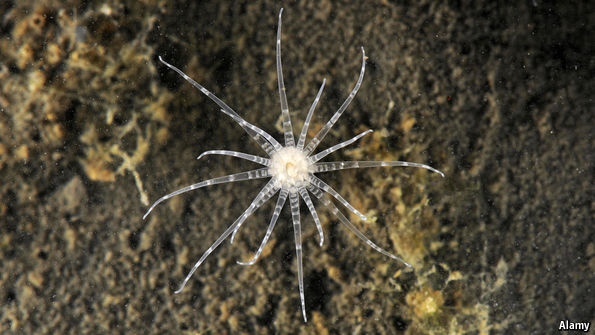 They say that hearing loss isn’t something that is reversible–just ask Pete Townshend of the legendary rock band The Who. After decades of playing before huge audiences surrounded by massive stacks of amplifiers–and one famous mid-1960s incident in which the band’s drummer Keith Moon set off an explosive charge that was triple what it was supposed to be while Townsend was standing right next to it–the singer has battled hearing loss nearly as long as he has been playing music.

The problem with hearing loss is that it occurs due to damage to tiny bundles of hairs inside the ears that vibrate in response to sound–and these hairs don’t grow back once they are damaged or dead. Cells at the base of these hairs send signals to the brain, and voila, we register various sounds.

However a new study involving an ointment derived from proteins harvested from sea anemones may actually make a restoration of hearing in humans possible.

The sea anemone in question, the Nematostella vectensis has a primitive sense of “hearing” in which tiny hair bundles along their tentacles sense when animals they can sting and feed on are close by. Scientists have observed that, although these bundles can be injured in struggles with predators and prey, they grow back within a span of four hours or so.

The study, led by Glen Watson of the University of Louisiana–Lafayette, and published in the Journal of Experimental Biology used a mixture of some 37 proteins from the Nematostella that were known to help repair or destroy misfolded proteins–used by the anemone to reorganize their jumbled bundles of hearing hairs.

He found that when used on the damaged sensory hair bundles of the blind cavefish–which were known to take some nine days to repair themselves–they were instead repaired in under an hour with the anemone proteins applied.

Following that test, the team used the hair bundles extracted from mouse pups, isolating the tissue and culturing it on microscope slides. They then exposed some of them to calcium, known to cause damage to the hair bundles, and others they left alone.

In treating the damaged hair bundles with the sea anemone protein concoction, they did indeed find that the damage had been repaired.

Of course, despite the fact of the substance working on mammal tissue on a slide, that is still a far cry from using it in a living, breathing mammal–say, Pete Townshend for instance.

Nonetheless, we should be hopeful that for the first time, science may have found a way to reverse the ravages of hearing loss.

Still, make sure you wear your earplugs when you’re rocking out kids. We’re still a long way off from sea anemone gel hearing repair for sale in your local drugstore–or guitar store.
###
http://www.economist.com/news/science-and-technology/21705298-sea-anemones-may-hold-answer-problem-hearing-loss-gone-today-hair