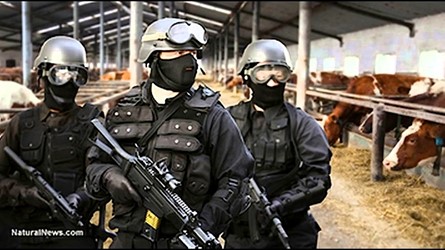 You’ve probably heard tales about how those thrifty bean-counters at the Pentagon have been providing local law enforcement with tanks, armored troop vehicles, and other surplus weaponry from the Gulf War theater at fire sale prices (read: for free).

But did you know that the U.S. Department of Agriculture and the Environmental Protection Agency each employ their own SWAT team?

SWAT raids are no longer solely the purview of overenthusiastic G.I. Joe wannabes swooping in on low-level drug dealers and even gearing up to serve warrants on non-violent offenders.

Now the overuse of the deadly machinery of the militarized state is being employed to crack down on people who have the audacity to grow their own lemons, raise bees, or produce raw milk. For the U.S. government it isn’t enough to stop these clearly deadly and dangerous operation by, say, having a pair of officers stop by such an operation and serve them with cease and desist papers.

No, what is clearly needed to deal with artisanal farmers as well as people who are simply interested in feeding themselves in a more natural way is thugs dressed head to toe in armored Kevlar, slinging AR-15s and knocking down the doors of farmhouses.

And this is no fluke. There are several reported examples of the USDA using its SWAT teams to:

• Threaten lemon growers
• Enforce fines on people selling rabbits
• Confiscate raisins
• Confiscate bees that were proven resistant to Monsanto’s glyphosate-laden Roundup. In that case all the queen bees in the colony were reportedly killed

So what on earth is going on here? Other examples of bureaucratic agencies looking to gear up include requests from:

All told, over the past decade, 44 of what are known as traditionally administrative federal agencies have put in requests for some $71 million in military equipment, including firearms, ammunition, and even rocket launchers.

Forgive an old paranoiac raised on the X-Files, but is something going on here? Is the alien/human DNA hybrid project about to come online, or what?

Or perhaps its just that the Feds, along with the local cops have seen which way the wind is blowing. A citizenry that has finally noticed in the wake of the Snowden revelations and a completely rigged primary presidential race that it isn’t nearly as free as it thought could well turn out to be something to reckon with, if it ever manages to get past the stage of merely complaining while clicking through channels.

The contempt in which the people’s employees hold the people is in itself contemptible. They don’t control us–we control them. We–and they–would do well to keep that firmly in mind as we ramp up to what promises to be a raucous general election.
###
http://ronpaulinstitute.org/archives/featured-articles/2016/june/16/militarized-usda-and-epa-using-swat-teams-to-terrorize-innocent-people-including-lemon-growers-and-small-farmers/