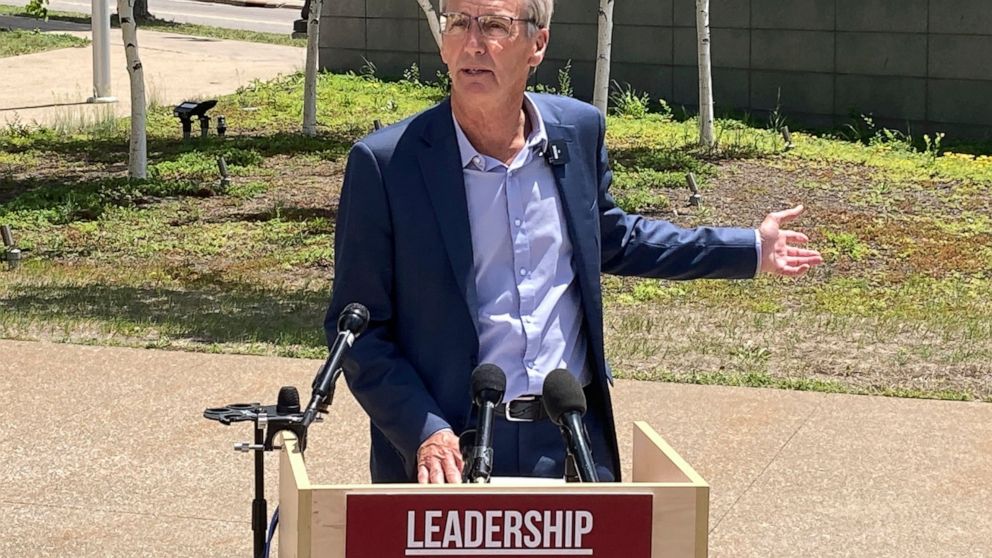 MINNEAPOLIS (AP) — Republican gubernatorial candidate Scott Jensen has threatened to retaliate against the Minnesota board that oversees doctors, which is investigating him for the fifth time, vowing that “this juggernaut will be dealt with” if he’s elected.

Jensen is a COVID-19 vaccine skeptic who has called for civil disobedience over masks and promoted alternative treatments such as ivermectin. He has also said Minnesota’s Democratic secretary of state, Steve Simon, should be jailed over his running of the state’s election system. Jensen won the GOP endorsement last month to challenge incumbent Democratic Gov, Tim Walz, whom he has sharply criticized for his response to the pandemic.

Jensen, a family practice physician from Chaska and former state senator, criticized the board at a campaign event Monday and renewed his attack with a video he posted to Twitter Thursday night. Jensen said all five investigations were based on allegations from anonymous critics. Jensen said he has provided information to the board, but has heard nothing back in months.

“I should not have to practice medicine, or run for governor, with this cloud of, if you will, uncertainty hanging over my head,” Jensen said in his video. “And yet that’s what I’m doing. I’m living with that.”

Jensen noted in response to a question about the board at Monday’s event that if he’s elected, he’ll get to appoint members to the medical board. “And I said this juggernaut will be dealt with,” he added in his video, describing the board as a “massive, inexorable force” that’s been turned against him for political reasons.

“I will not stand for the Minnesota Board of Medical Practice being weaponized,” he said.

The governor-appointed board comprises 16 people — including physicians, members of the public and an osteopath — who can serve up to two consecutive four-year terms. All were first appointed by Democratic governors and nine seats are due for appointment or reappointment in the next gubernatorial term. Members generally can be removed only for cause or missing meetings.

“The Minnesota Board of Medical Practice investigates complaints as required by and in accordance with state laws and rules,” its executive director, Ruth Martinez, said in an email. “The Board does not have a response to Dr. Jensen’s comments.”

The board does not comment on any complaint unless it decides corrective action is necessary. According to Jensen, it dismissed the first four complaints against him without action.

But the Minnesota Medical Association, which represents more than 12,000 physicians, residents and medical students, defended the Board of Medical Practice.

“Its duty is to protect the public and is required by law to investigate any complaint it receive, while ensuring due process for physicians,” the group’s president, Dr Randy Rice, said in a statement. “The MMA opposes any efforts to politicize the work or the membership of the Board.”

“These despicable remarks are disqualifying,” Ken Martin, the state Democratic Party chairman, said in a statement. “Anyone who repeatedly promises to use the governor’s office to jail or fire their personal enemies is unfit for public service. The doctors who serve on the board investigating Scott Jensen are not anti-vaccine conspiracy theorists, which is what makes them different from him. Scott Jensen’s extremism and disturbing enthusiasm for political retaliation don’t belong anywhere near the governor’s office.”

At least a dozen regulatory boards across the country have sanctioned or investigated doctors for promoting unproven treatments such as ivermectin or spreading COVID-19 falsehoods. Ivermectin is commonly used to treat humans and animals for parasites, but the U.S. Food and Drug Administration has not approved it to treat or prevent COVID-19.

Jensen confirmed to the St. Paul Pioneer Press recently that he still has not been vaccinated against the coronavirus even though he continues to see patients. He has long maintained that he doesn’t need to get vaccinated because he gained natural immunity when he caught COVID-19 in 2020, a common view in the GOP that conflicts with the prevailing medical wisdom.

Joel Wu, a medical ethicist at the University of Minnesota, said he was troubled by Jensen’s comment that the board is preventing doctors from providing the care their patients want. Wu said patients need to be able to rely on doctors to provide safe and effective care and that the board has a duty to protect the credibility of “the entire medical enterprise” by maintaining professional standards.

One thought on “Minnesota Physician Threatens Retaliation Against Medical Board”