“The Police Power of the State is Not without Limits” 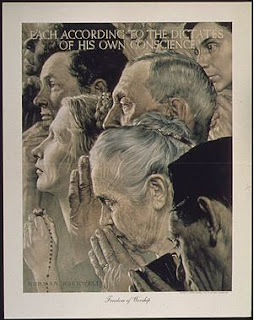 The Governor of Kansas issued sweeping restrictions as part of a “lockdown” order predicated on the COVID-19 declared pandemic.  Those restrictions weighed more heavily on religious meetings than on other, secular, meetings.

“On April 18, federal Judge John Broomes issued a temporary restraining order against Kelly, finding that the churches were likely to prevail on their claim that her order violated the First Amendment rights of their parishioners ‘to freely exercise their religion, including their right to attend worship services in their respective church facilities.’ He brushed aside Kelly’s claim that her executive order treated religious institutions no differently than ‘a large swath of both secular and non-secular behavior,’ noting that the order expressly targeted churches to ‘restrict religious activity.’ Further, the judge observed, religious gatherings present no ‘unique health risks’ that could justify such discriminatory treatment. Kelly also tried to justify her actions by citing a 1905 U.S. Supreme Court decision, Jacobson v. Massachusetts, which involved a state law mandating smallpox vaccinations in the midst of a smallpox epidemic. But Broomes explained that ‘even in such extreme cases as a public health crisis, the police power of the state is not without limits.'” – https://dailysign.al/3fq88Wv

I have long argued that Jacobson is not blanket authorization from the Supreme Court to mandate vaccines.  That argument is made in my General Brief in Support of Informed Consent, posted here:  https://tinyurl.com/GeneralBrief.  In Jacobson the Court stated:

“…if it be apparent or can be shown with reasonable certainty that he is not at the time a fit subject of vaccination or that vaccination, by reason of his then condition, would seriously impair his health or probably cause his death.”

In so far as Jacobson is used to justify forced vaccination, it is essentially old law, which does not take into account subsequent decisions. The Brief reviews those decisions, but two stand out.  One is Schloendorff v. Society of New York Hosp.,105 N.E. 92, 93 (N.Y. 1914) which held medical intervention without Informed Consent to be an assault and battery and the other is Missouri vs McNeely, 569 US 141 (2013)  wherein the Supreme Court stated:

Even a “…diminished expectation of privacy does not diminish the… privacy interest in preventing a government agent from piercing the… skin. And though a blood test conducted in a medical setting by trained personnel is less intrusive than other bodily invasions, this Court has never retreated from its recognition that any compelled intrusion into the human body implicates significant, constitutionally protected privacy interests…”

Judge John Broomes should be honored as a member of the Federal Bench who understands the powerful notion that “the police power of the state is not without limits.”  Among those limits are those imposed by the Constitution, especially the Bill of Rights as applied to the States by the 14th Amendment.