Authored by Jeff Carlson and Hans Mahncke via The Epoch Times,

A newly released memo from the U.S. State Department reveals that government officials knew early on that the COVID pandemic likely originated at a lab in Wuhan, China. 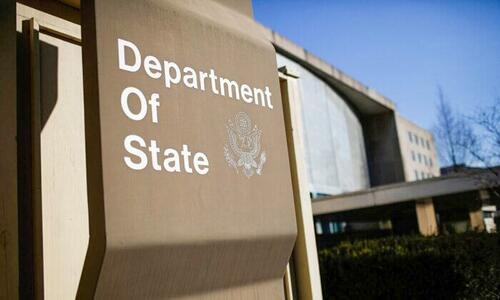 That memo, dated April 2020, states that out of five possible origins for COVID, a lab leak was by far the most likely. The memo also suggests that alternative theories had been introduced to prevent a lab leak from being investigated. The memo, which focuses almost entirely on the likelihood of a lab leak, contains a large amount of information that wasn’t known publicly at the time it was written.

Although a lab leak is now widely accepted as a likely origin for the virus, when the memo was written, a concerted effort was underway to discredit that possibility. It also raises the question of what senior State Department leadership—including then-Secretary of State Mike Pompeo—knew and why the information was withheld from the public.

According to the newly released memo, the State Department knew as of April 2020 that the central issue surrounded an obsession with collecting and testing a massive amount of virus-carrying bats on the part of the Wuhan Institute of Virology and China’s Wuhan-located Center for Disease Control and Prevention (CDC).

The State Department noted that lab testing of the earliest-known patient at the Wuhan Central Hospital in December 2019 determined that the virus was a “Bat SARS-like Coronavirus.” At the time this patient was tested, the Chinese Communist Party (CCP) hadn’t disclosed that there was any problem at all.

When they finally acknowledged an outbreak, they initially blamed it on pneumonia. It was only at the end of January that the CCP finally started admitting that COVID-19 was caused by a new virus that was transmitted between humans.

By that time, the virus had already been seeded across the globe and any chance at suppression had been lost. It was during this same period that the director of the National Institute of Allergy and Infectious Diseases, Dr. Anthony Fauci, was made aware of the virus’s likely origin, having been told by a group of scientists whom he was funding that there was a high probability that the virus was engineered.

Although it’s been known since June 2021 that Fauci and the NIH covered up his knowledge of the virus’s origin, the State Department’s early insight into these matters wasn’t fully known until late March 2022, when the transparency group U.S. Right to Know obtained the April 2020 memo.

The memo, titled “An Analysis of Circumstantial Evidence for Wuhan Labs as the Source of the Coronavirus,” comprises five pages and is written in military BLUF style, meaning “bottom line up front.”

The memo begins by stating that one of two Wuhan labs is the likely source of the COVID outbreak. The two labs identified by the state department are the Wuhan CDC’s lab located in downtown Wuhan and the Wuhan Institute of Virology, where Shi Zhengli was known to have conducted dangerous gain-of-function experiments on bat viruses.

The State Department’s focus on the Wuhan CDC lab as a possible source is particularly significant as that facility is located only a few hundred feet from the Huanan Seafood Market where an already infected customer may have caused a superspreader event in December 2019.

Notably, the World Health Organization’s lead investigator of the virus’s origin, Peter Ben Embarek, privately told a Danish TV crew that he suspected that the Wuhan CDC lab was the origin of the pandemic. Embarek, who promoted a natural origin for the virus in his public report, privately noted that the CDC lab had mysteriously moved to its new downtown location in early December and that such a move may have increased the chances of a lab leak or accidental spillage.

The other lab identified by the State Department as the likely source of the pandemic is the Wuhan Institute of Virology, which has been the main focus of attention over the past two years.

The State Department memo noted that the Wuhan Institute, by far the most logical place to investigate the virus origin, had been completely sealed off from outside inquiry by the CCP. The memo also noted that a gag order regarding both Wuhan labs had been issued on Jan 1, 2020, and a major general from the People’s Liberation Army had assumed control over the Wuhan Institute of Virology since early January of 2020.

The State Department memo emphatically stated that “All other proposed theories are likely to be a decoy to prevent inquiry to Wuhan CDC and Wuhan Institute of Virology.”

It bears repeating that the memo was written in April 2020.

That’s because the State Department’s decoy argument mirrors the actions taken by Fauci and then-National Institutes of Health (NIH) head Dr. Francis Collins who–at the same time this memo was written–were actively suppressing and censoring any public discussion of the lab leak scenario. When Fox News ran a story in April 2020 suggesting that the virus came out of a Wuhan lab, Collins immediately contacted Fauci to explore ways the two men could “put down this very destructive conspiracy.”

Collins had previously told Fauci and his group of scientists that “science and international harmony” could be harmed if the lab leak theory took hold. Collins’s directive led Fauci’s group to publish two papers that categorically dismissed the lab leak theory, one in the medical journal the Lancet and the other in the scientific journal Nature. Those two papers would become the cornerstone of combined efforts from Fauci’s scientists, the media, Big Tech, and the U.S. government to suppress any discussion of a lab leak, while simultaneously promoting the natural origin theory.

The State Department memo also lists many facts that the public has only come to know in piecemeal fashion over the course of the past two years. We’ve previously covered many of these details on our show, including that the Wuhan CDC had a resident “Batman”—Tian Junhua—who bragged about personally having collected more than 10,000 virus-carrying bats as lab samples from Chinese caves.

Tian also was widely known for his recklessness and carelessness during his collection process.

Regarding the Wuhan Institute of Virology, the State Department memo noted that the director of the lab, Shi Zhengli, had conducted gain-of-function engineering of bat viruses to make them more easily transmittable to humans. As we now know, the defining feature of the COVID-19 virus, its furin cleavage site, is what makes the virus particularly transmissible in humans. While no furin cleavage site has ever been observed in naturally occurring SARS coronaviruses, Shi was part of a 2018 research proposal that aimed to insert exactly such a feature into coronaviruses.

The State Department’s memo also highlights the poor safety standards at the Wuhan Institute, a fact that could easily lead to an unintentional leak of the deadly virus to the outside population. Interestingly, the memo also questions the disappearance of lab worker Huang Yanling, whose bio, profile, and picture were scrubbed from the institute’s website shortly after the outbreak. To this day, Huang’s whereabouts and well-being remain unknown.

Lastly, the memo takes a detailed look at a Chinese medical professional whose online name is Wu Xiaohua. Wu claimed that Shi Zhengli was playing God by creating coronaviruses with the specific aim of making them more transmissible in humans. Wu also claimed that Shi used intermediate animals in her lab and that her lab’s management of deadly viruses was appallingly poor and negligent.

The State Department memo found Wu’s claims to be credible and that assessment holds up well, given the information that has been made public in the intervening two years. We now know Shi had an active plan to insert furin cleavage sites into bat viruses, we know that she used humanized mice to test how her virus creations would affect humans, and we know that her lab was repeatedly cited for its poor safety record.

The most striking takeaway from the memo is that it focuses almost entirely on the lab leak scenario, reflecting that the State Department was almost certain in April 2020 that the virus had originated in a lab. What remains entirely unclear is why neither the State Department nor Secretary Pompeo released this information as soon as they had it.

Had the memo been made public nearly two years ago when it was written, the course of events would have been very different. Knowing that the virus came out of a lab would have refocused public attention and the search for remedies could have been more focused.

There also would have been more concerted efforts to prevent future leaks. Rather than misdirecting the public toward a natural origin, Fauci and the NIH would have been exposed for their role in funding the work at the Wuhan Institute.

Most importantly, the Chinese Communist Party would have been subjected to greater international pressure for its role in suppressing any advance information regarding the outbreak. The memo might also have had an impact on the 2020 presidential election, as voters tended to see Donald Trump as far more capable than Joe Biden in taking on the CCP.

While we don’t know with certainty why the memo was concealed, the only person who had a constitutional role in deciding if suppression of a lab leak should be the policy of the U.S. government was President Trump. Although it’s possible that Trump decided it would be better to conceal the facts, it’s far more likely that, like all of us, the president was kept in the dark.