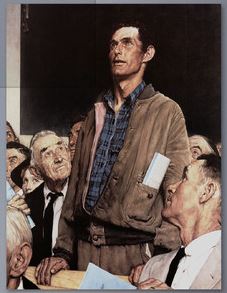 N. Rockwell – Freedom of Speech
2020 Update:  http://www.opensourcetruth.com/trump-issues-internet-censorship-policy-order/
While some might consider my expressed views* on what happened last month to Alex Jones and www.InfoWars.com, namely, being “banned” [a term that reminds me of the evils of Apartheid] by nearly all the major social media during one 24 hour period, a conspiracy theory, I assert that the evidence does support the theory that these major corporate actors were acting in concert and that their actions violated the Racketeer Influenced and Corrupt Organizations Act (RICO)[1] and the 14th Amendment[2].

I think anyone so “banned” by the Deep State Social Media Crony Corporations has good grounds to sue.

We are told that the “bannings” were not unlawful censorship since the banning entities are all private companies, not subject to the First Amendment’s injunction, “Congress shall make no law … abridging the freedom of speech…”

The First Point of Law to note is that the Supreme Court has applied the language of the First Amendment to not just Acts of Congress, but to any actions of the Federal Government, and, through the 14th Amendment, to the States as well.[3]

The Second Point of Law to note is that Internet Access is protected under the First Amendment. In the 2017 case of Packingham v North Carolina the Supreme Court held that “a fundamental principle of the First Amendment is that all persons have access to places where they can speak…”[4]

The Third Point of Law to note is that the 14th Amendment provides that States may not make or enforce any law that abridges the rights of US citizens.  This includes, of course, the granting of the corporate franchise to private companies such that they may act in violation of our Fundamental Rights.

The Internet was initially established by the US Government and remains a “public utility,” although used by private persons to communicate and by publicly registered and traded companies to profit from our communications.

The social media corporations are in law “creatures of the state” existing by virtue of the grant of the corporate franchise which permits such entities privileges that are not applicable to purely private persons, including the limited liability privilege and the privilege of selling shares to the public as a joint stock company, to profit from the use of the Internet Public Utility.
While these companies appear, to some degree, as “private” businesses, they act over the Internet Public Utility. They act “under color of law” and are therefore more akin to government agencies than to private actors.
That these entities engage in substantial commerce with the government, receiving tax funds for certain contracts including the providing of data about users to government, and benefiting from the use of the Internet Public Utility further substantiates their status as agents of government power.
As such, they must be bound by the restrictions of the First Amendment and cannot discriminate among their users on the basis of the content of the Speech which the users express over the Internet Public Utility.
When several of these quasi-private companies act in apparent concert to ban the Speech of a particular user over the Internet Public Utility they do so “under color of law” and in violation of the Freedom of Speech of both the speaker and those who seek to hear.  Both Freedom of Speech and Freedom of Association are restricted through the exercise of authority depending on government. This is unlawful.
The effect of the unlawful actions of the companies is to tortuously interfere with valuable commercial relationships, between the speaker and hearer, causing substantial financial harm and damages. BTW, I note, currently, Facebook still accepts ads from certain “banned” companies. But not from others.
Such unlawful acts, and the unlawful combination to engage in such acts, may violate the provisions of RICO.  The companies that are the most egregious banners include PayPal, Google, Facebook, Twitter and YouTube.
Some of these same companies are “making pacts with the devil” by developing special government-censored versions of their services for Communist-controlled China, enabling that tyrannical regime to impose its social control system on the world’s most populous country.
In the United States, the targeting of individuals because of the content of the Speech they seek to express over the Internet Public Utility can be seen as a type of commercial extortion forbidden under RICO.  Conspiracies to do so may provide the second “act of racketeering activity” to invoke RICO.
It is therefore my professional opinion, to a reasonable degree of professional certainty, that the “banned” individuals and companies have valid grounds to sue the social media companies that have “banned” them from the Internet Public Utility.
Such litigation could be started in the Federal District Court wherein the headquarters of any of the corporate actors might be located.
# # #
* As I wrote recently at Open Source Truth [5]:

Our Freedom of Speech is under a world wide web of attack.

While various authoritarian states make no effort to hide direct censorship of speech, the “advanced democracies” are more subtle. Germany, with no absolute constitutional protection for Free Speech, is contemplating empowering Internet Service Providers to refuse service to “hate groups.” At the same time the large international corporate controllers of the Internet, such as YouTube, Facebook and Google, are already escalating content controls to enforce “political correctness” – if you don’t follow the Party Line, you cannot be heard.

These supposed private Social Media Companies are actually exercising government authority. Just as much as if they had been the “private” Tax Farmers of Ancient Rome.

They are the privatized agents of Deep State control and censorship. They exercise this control on several levels. Each of these mega-corporations is, in fact and in law, “a creature of the state.” It is created by registration with government that gives it authorities (such as limited liability to third parties) which it could not exercise as a truly private association.

If the same Rule of Law that applies to truly private actors applied to government and its crony corporations, “content control” efforts would be understood to be exactly what they are: censorship. Real free market competition and technological progress would rapidly make the near-monopoly power of Google and Facebook irrelevant. If the same Rule of Law that ought to apply to Government Censorship – that there can be no such law – applied to the crony corporations, YouTube, Facebook etc., “private” censorship could not remain.

[1] https://en.wikipedia.org/wiki/Racketeer_Influenced_and_Corrupt_Organizations_Act
[2] “No State shall make or enforce any law which shall abridge the privileges or immunities of citizens of the United States” – 14th Amendment
[3] “Beginning with Gitlow v. New York (1925), the Supreme Court applied the First Amendment to states—a process known as incorporation—through the Due Process Clause of the Fourteenth Amendment.” https://en.wikipedia.org/wiki/First_Amendment_to_the_United_States_Constitution
[4] Ibid. “In Packingham v.North Carolina (2017), the Supreme Court held that a North Carolina law prohibiting registered sex offenders from accessing various websites impermissibly restricted lawful speech in violation of the First Amendment. The Court held that ‘a fundamental principle of the First Amendment is that all persons have access to places where they can speak and listen, and then, after reflection, speak and listen once more.’”
[5] http://www.opensourcetruth.com/data-mine/