President Trump has issued an Executive Order, which is a form of legally-binding directive to the bureaucrats in the Executive Department, regarding Social Media and private censorship of Internet speech. 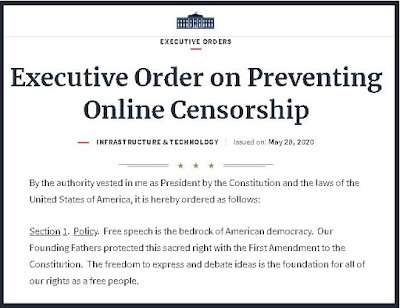 It has long been the position of the Internet service provider platforms that they are protected from liability for what their users post on their platforms or send through their services.

The Executive Order is here:
https://www.whitehouse.gov/presidential-actions/executive-order-preventing-online-censorship/

It provides, in part:

It is the policy of the United States to foster clear ground rules promoting free and open debate on the internet.  Prominent among the ground rules governing that debate is the immunity from liability created by section 230(c) of the Communications Decency Act (section 230(c)).  47 U.S.C. 230(c).  It is the policy of the United States that the scope of that immunity should be clarified: the immunity should not extend beyond its text and purpose to provide protection for those who purport to provide users a forum for free and open speech, but in reality use their power over a vital means of communication to engage in deceptive or pretextual actions stifling free and open debate by censoring certain viewpoints. {Emphasis added.]

In particular, subparagraph (c)(2) expressly addresses protections from “civil liability” and specifies that an interactive computer service provider may not be made liable “on account of” its decision in “good faith” to restrict access to content that it considers to be “obscene, lewd, lascivious, filthy, excessively violent, harassing or otherwise objectionable.”

When carefully read, the Trump Executive Order does nothing new.

Section 230 of the 1996 internet statute does not exempt internet service providers from liability for censoring political opinion speech. I have argued that there is a legal basis for holding them responsible under the RICO and other laws. http://www.opensourcetruth.com/stop-the-bannings-sue-the-deep-state-corporate-shills/

The social media corporations are in law “creatures of the state” existing by virtue of the grant of the corporate franchise which permits such entities privileges that are not applicable to purely private persons, including the limited liability privilege and the privilege of selling shares to the public as a joint stock company, to profit from the use of the Internet Public Utility. While these companies appear, to some degree, as “private” businesses, they act over the Internet Public Utility. They act “under color of law” and are therefore more akin to government agencies than to private actors.

The law does, however, exempt those companies that profit from using the internet commons from liability for removing (censoring) a small category of speech from their platforms, including, for example, obscenity.

The normal way to interpret lists in statutes is under the rubric of “expressio unius est exclusio alterius” — expressing the one excludes the other.  Where a list includes specifics and ends in a general term, as does section (c)(2), that general term is restricted by the specifics.

The service providers were never exempt from responsibility if they chose to censor political opinion (or any opinion) speech.  They can no longer hide behind a law that never protected them in the first place.

Expect litigation against the private censors.

And that is not a bad thing.

Timothy Mallett: Yeah they blocked one of my post a few days ago. S...
Mark: All of this censoring is waking up the normies... ...
Charles Smith: I can add that the church knows the truth about So...
Charles A Smith: I have read "The Hidden Rainbow" and I have read m...
Rc: I went in Menards here in Indiana an showed card t...
Rc: Well I went in Menards store showed card they neve...
TruthOpener: Since the Right of Informed Consent is conferred b...
Nicole: I am in Australia , victoria the prison state. M...
Glenn A Potter: God gave us freedom of our own will, ... of whom i...
TruthOpener: What number on the card? Who didn't "sanction the ...