Governor ‘not surprised that legacy media would amplify the lie’ 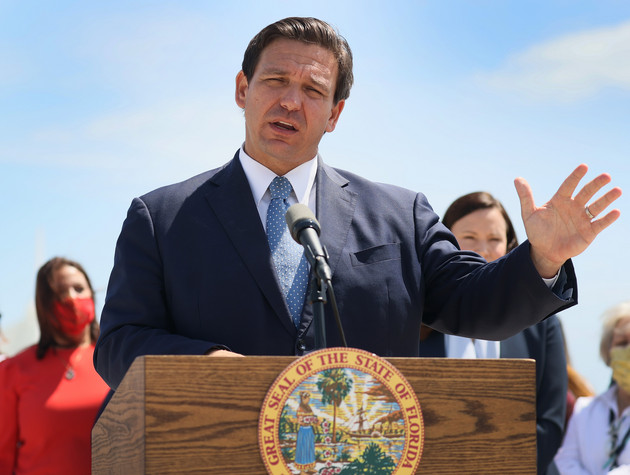 Florida Republican Gov. Ron DeSantis charged Monday that the White House lied about his state’s response to the FDA’s decision to allow children under 5 to receive an mRNA vaccine for COVID-19.DeSantis was criticized by some of his defenders last week when the White House insinuated he had backed down from his opposition to vaccinating young children and was “now permitting” health-care providers to order the vaccines for kids.The governor explained last Thursday that the state – based on scientific evidence – had decided not to preorder the vaccine or participate in its distribution. But from the beginning, Florida said the vaccine would be available at health-care facilities in the state and could be ordered from the federal government through state internet portals.

“The White House is lying about it, surprise. Not surprised the White House would lie, definitely not surprised that legacy media would amplify the lie, because that’s what they do,” DeSantis said. “The state of Florida, they came out with an article saying the state of Florida has not ordered, its Department of Health has not ordered mRNA jabs for the babies. Yes, we didn’t. We recommend against it.”

DeSantis – who has consulted with epidemiologists from Harvard, Stanford, Oxford and Yale – said Florida is “not going to have any programs where we’re trying to jab 6-month-old babies with mRNA.” he added.

“That’s just the reality. I think what they thought would happen was that we’d be embarrassed about it.”

The governor explained Monday that Florida didn’t preorder the vaccine because the state has concluded they should not be administered to healthy children.

“And quite frankly, if someone wants to make a different decision, I would just caution people to look at the actual data in the clinical trial,” DeSantis said.

No other country in the world has authorized COVID-19 vaccines for children under 5.

In March, Florida’s surgeon general, Dr. Joseph Ladapo, announced the state had become the first to recommend against vaccinating healthy children for COVID-19. The announcement came at the end of an 85-minute roundtable of epidemiologists and other medical scientists hosted by DeSantis titled “The Curtain Close on COVID Theater.”

The governor posed questions regarding the effectiveness of the vaccines in reducing infection and transmission as well as the crucial issue of safety. Among the participants were Drs. Robert Malone, Harvey Risch of Yale, Jay Battacharya of Stanford, Sunetra Gupta of Oxford and Martin Kulldorf, formerly of Harvard.

Last Friday, the FDA authorized the Pfizer and Moderna shots for children as young as 6 months one day after Dr. Anthony Fauci acknowledged in a Senate hearing that there are no scientific studies demonstrating the COVID-19 vaccines reduce the risk of hospitalization and death in children, let alone transmission.

The CDC, after initially insisting the shots prevent transmission, now admits that they don’t.