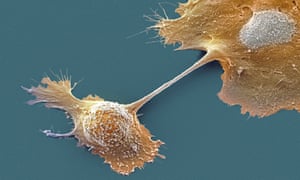 The war on cancer is as broad as it is deep. A multi-billion dollar industry, there are untold numbers of researchers pursuing multiple directions in the fight to combat the disease–a many-headed hydra battling a many-headed hydra.

And one of the more esoteric lines of research has borne fruit: a new drug that is said “wake up” the immune system and enlist it to fight against pancreatic cancer is emerging, and it appears that it could be a tremendous weapon against one of the most difficult forms of the disease to combat.

The drug, known as IMM-101 is already in human trials, where it has been shown to extend the lives of people with metastatic pancreatic cancer. What’s more, the drug performed this minor miracle on patients who showed no signs of any side effects at all.

This is especially welcome news, as often the treatment for such a brutal form of cancer is in itself brutal, and can continue to harm people even if they do recover: the treatment can even lead to long-term disability for some patients.

This is so miraculous because pancreatic cancer is especially troublesome, especially once it has metastasized to other parts of the body. In the vast majority of cases, once it reaches this point the patient only has a few months to live.

Howevre, patients who were given IMM-101 reported that they felt better than those who were on standard chemotherapy, according to study lead Angus Dalgleish, professor of oncology at St George’s, University of London.

“To me it’s really exciting,” said Dalgleish in an interview with The Guardian. “This is the first time we have got an immunotherapy that is a really good candidate to help control pancreatic cancer, which is one of the biggest killing diseases. Its incidence nearly matches its mortality. It is absolutely staggering.”

And despite the fact that the trial group is small–only 110 people–Daigleish is excited for all the right reasons: any progress agains pancreatic cancer is welcome. Within one year the disease kills 82 percent of those for whom it gets to the advanced stage; it kills 96 percent within five years.

Perhaps most important was the fact that IMM-101 worked without causing any side effects.

“That’s never been seen before,” said Dagleish. “You always add toxicity and misery in my experience with each additional thing you put in.”

The results were published in the British Journal of Cancer.
###
https://www.theguardian.com/science/2016/sep/06/new-drug-wakes-up-immune-system-to-fight-one-of-deadliest-cancers