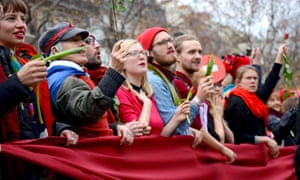 A lot of things have happened to the US since 1968.

We put a man on the moon, the Beatles broke up, we ended the Cold War, and we invaded Iraq. Twice.

Oh yeah, and we were the biggest contributor to greenhouse gas emissions that raised the Earth’s temperature by a few critical degrees, hastening the dissolution of the icecaps, changing the weather patterns, and raising sea levels.

But oh, how different things might have been. A new trove of documents reveals that oil industry officials working at the American Petroleum Institute all the way back in 1968 were presented with a report from the Stanford Research Institute warning that the release of carbon dioxide from burning fossil fuels could unleash a devastating matrix of consequences for the planet.

The report, which was unearthed by the Center for International Environmental Law, states, “Significant temperature changes are almost certain to occur and these could bring about climatic change. If the Earth’s temperature increases significantly, a number of events might be expected to occur including the melting of Antarctic ice, a rise in sea levels, warming of the oceans and an increase in photosynthesis.”

Truly terrifying stuff, in light of recent information showing how much further along the melting of the Antarctic ice cap is than previously thought.

The study’s authors, scientists Elmer Robinson and R.C. Robbins also stated that the accumulation of CO2 in the atmosphere could cause “serious worldwide environmental changes.”

So API, the oil industry’s trade association in the United States, knew about climate change at least 20 years before the information was released to the public. Luckily former NASA scientist James Hansen gave critical testimony to Congress in 1988 warning about the dangers of climate change, and bringing the subject the light for the general public for the first time.

Of course, last year, Exxon Mobil was revealed the to have known about climate change as early as 1981, and having spent millions of dollars to suppress, obfuscate and refute any public information on climate change over the next 27 years. The oil company has a dedicated in-house team that established a connection between fossil fuels and climate change on its own long ago, yet they have continued to deny the truth of its catastrophic potential.

But the trickery on the part of the petroleum industry doesn’t stop there. It goes all the way back to 1946. Other documents reveal that oil and gas executives held a meeting in 1946 and agreed to pool their funds in order to research air pollution issues. But now of course, we know what they did with those findings.

At any rate, it is truly a sad thing to think about what changes and adaptations the human race could have made had we had all the facts all those years ago. When you think about the lives, livelihoods and quality of life that have been and will be lost due to catastrophic climate change, perhaps criminal charges of malice aforethought are not so farfetched.