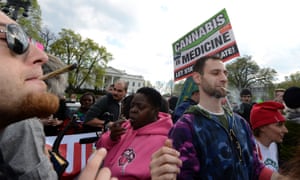 A letter to Senator Elizabeth Warren from the Drug Enforcement Agency (DEA) seems to indicate that the agency is planning to reclassify marijuana from its current Schedule 1 status, a change that could come as soon as this July.

The agency said that it could decide whether marijuana should remain at the same level as LSD and heroin by “…the first half of 2016,” which some are reading as an indication the hard-line agency is finally coming around on the reality of marijuana as opposed to ancient, fear-mongering legends about the plant.

Warren, who has been actively pursuing changes in the way the agency deals with marijuana, had asked for more information on marijuana’s scheduling and about limits on medical marijuana research. She and seven other senators have been pressuring the DEA to alter or at least explain its continued stubbornness with regard to marijuana regulation.

The DEAs apparent thawing around the classification of marijuana is of course taking place in a climate that is much different from any other time in the nation’s history, and the history of the world regarding drug use. While medical marijuana remains federally prohibited, it is legal in 23 states and Washington DC, and countries around the world have decriminalized its use and legalized it for medical use–Uruguay recently made the plant completely legal across the board.

But in the States, the result of this disparity in laws has resulted in marijuana dispensaries and growers acting within state law being raided by federal authorities, having their assets seized, and worse. In California and Colorado, medical marijuana farmers and dispensers have accused law enforcement of using SWAT team tactics and endangering lives and property against people who are within the law, at least on the state level.

The DEA’s letter to the senators also said the Food and Drug Administration has finished a review of the safety of marijuana and that its recommendation have been forwarded to the DEA. The FDA’s recommendation was not disclosed in the letter.

The letter is just the latest development in Warren’s ongoing battle with the Feds over marijuana. In February, Warren wrote a letter to the CDC director Thomas Friedan asking the agency to devote resources to the question of whether medical marijuana could help in the opioid crisis that is devastating huge swaths of rural America.

The timing couldn’t have been better for the DEA letter as a protest took place outside the White House over the weekend, with hundreds of people openly smoking pot and carrying a giant 51-foot “joint,” that said “Obama: Reschedule Cannabis Now.”

At any rate it’s good to see Senators like Elizabeth Warren actually doing the work of the people she represents. If only the rest of Congress could recall why they are actually there.