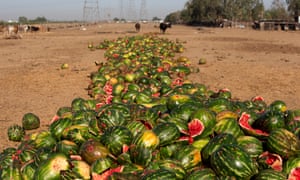 Let Them Eat Cake: Study Finds That Americans Are Throwing Out Half The Food They Produce Because It Doesn’t Look Nice Enough

We all hear about how wasteful people in the U.S. are, and there is more than anecdotal truth to that. If you’ve ever lived overseas in a county that is less wealthy than the U.S., you learn very quickly how long consumer items can really last. And not only last for their original purpose, but be reworked and perhaps reworked again for multiple purposes beyond those for which they were intended.

Food is no exception: living in countries where people don’t have the option of putting their Whole Foods purchases on their Amex card and loading their groceries into their Range Rover, you learn very quickly how far you can stretch a food budget by using and preparing fresh, local ingredients in traditional ways.

But an appalling new study has found that Americans’ “cult of perfection” now extends to its grocery stores: half of all the food Americans produce gets throw away simply due to aesthetic considerations.

And another component is saving money on food is of course making do with what you’ve got. This is the millennia-old logic and simplicity of eating seasonal foods that don’t have built-in fuel and transportation costs like so many foods do in North America, where everything must be available all the time, no matter what season it is.

But is also has to do with eating what you’ve got, aesthetics be damned. You don’t throw out a moldy tomato in a country in the global south; you cut out the moldy part and use the rest for soup or sauce or something.

But from California to New York City, data analysis shows that tons and tons of food are daily being left in the field to rot, trucked directly to landfills, or fed to livestock simply due to a demand for cosmetic perfection.

“It’s all about blemish-free produce,” said East Coast produce shipper Jay Johnson in a Guardian interview. “What happens in our business today is that it is either perfect, or it gets rejected. It is perfect to them, or they turn it down. And then you are stuck.”

And although there is no clear measure of just how bad the food waste problem is in the U.S., farmers, packers and producers say that the government estimate of about 60 million tons of produce annually wasted by retailers and consumers is laughably low.

When you factor in the waste that occurs between the farm and the store, that number is likely at minimum doubled.

It’s hard to imagine being truly, genuinely hungry for most of us who live in a modern, industrialized country.

If people in less fortunate places could see the produce that gets thrown out for nothing more than being the wrong color or shape, they would weep.
###
https://www.theguardian.com/environment/2016/jul/13/us-food-waste-ugly-fruit-vegetables-perfect