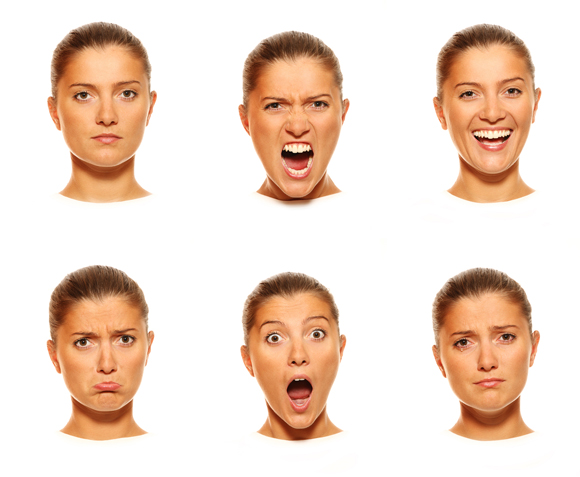 But I’m Smiling On The Inside: How Facial Expressions Can Change Emotions From The Outside In

One of the most famous images to come out of the Rio Olympics last month was that of a grumpy-faced Michael Phelps, corners of his mouth almost comically turned down, his face a mask of near-rage as he sat poolside awaiting the start of his next race.

The picture became a meme–because of course–but more than that it stirred a conversation around just what was going on with him at that moment: was he angry about something? Or was that his way of psyching himself up pre-race?

Many people brought up the idea of “facial feedback:” as one neuroscientist explained in an article in Outside magazine, the flexing of his facial muscles can in turn activate the amygdala, which would then send signals to his body to amp up and prepare for the race.

This is the same notion that has been around at least since at least Darwin’s time, that you can smile your way to a better mood, for instance. Self-help books since the 1960s have touted the idea of “fake it until you make it” when it comes to self-confidence, happiness, and many other mindsets.

Indeed some studies show that smiling–regardless of whether you feel like it or not–can make you happier and/or reduce stress–but has this theory actually been proven?

Attempts to replicate the results of these studies have been mixed.

One famous study devised a clever way to get people to “smile” or “frown,” and then proceeded to measure what they were feeling at those moments. Back in 1985, researchers Frtiz Strack and Leonard Martin of the University of Illinois created a study in which volunteers would be asked to hold a pen crossways between their teeth, forcing the face into a sort of “smile.” In contrast, others would be asked to hold a thermometer under their tongues, thus creating a “frown.”

The results were clear: when shown a series of “Far Side” comic strip panels, the pen-clenching, “smiling” test subjects consistently rated the cartoons as funnier than the ones who were made to “frown.”

But how do you definitively measure something as elusive and subjective as happiness–and how it relates to facial expressions? How do you know which comes first, the chicken or the egg?

In 2015 an attempt to replicate Strack and Martin’s results came up short of what researchers had hoped was pretty much a home run, given the clearness of the original outcome. Of 17 lab replications trying the same experiment, nine were consistent with the original results, eight were not.

Still, Strack is sticking to his guns, suggesting that a closer look at the test conditions are warranted rather than throwing out the concept altogether. Social mores change, people change; social scientists deal with this all the time–over the course of the 40 years between the studies there is certainly ample time for societal changes that would warrant new ways of making the test viable and accurate.

I mean, when was the last time you even saw a “Far Side” comic?

But whether or not science can prove that we can control our internal emotions to some degree with our facial expressions, let’s face it: smiling just feels better.

Unless you’re gearing up for a big race. Then maybe go for all the frowning you want–even if you run the risk of becoming a meme as a result.
###
http://www.slate.com/articles/health_and_science/cover_story/2016/08/can_smiling_make_you_happier_maybe_maybe_not_we_have_no_idea.html