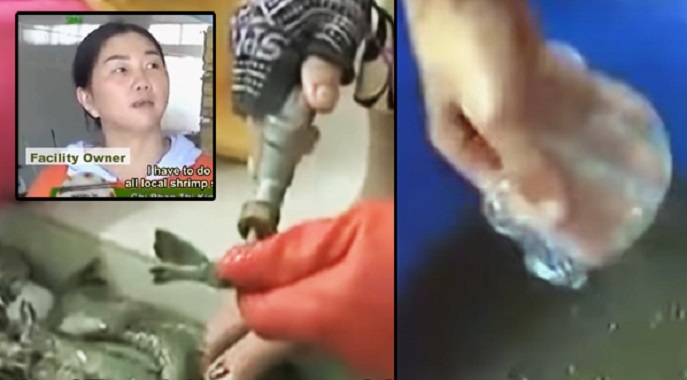 We all know in at least a vaguely unsettling way that factory farming methods come with a lot of problems. Rampant antibiotic overuse, hormone treatments, GMO feed for the animals, disease, massive environmental impact, cruel conditions–the list goes on.

But what many people don’t know is that nearly all of the problems listed about as they relate to hoofed animal facilities also apply to shrimp farming.

Only multiply them by a hundred.

Shrimp farming produces some of the most toxic, filthy, poison-laden product ever created as a foodstuff for human consumption. That humans actually ingest this vile product–grown in foul cesspools of feces-saturated and toxic water that is doused with copious amounts of antibiotics, some of which are banned in the U.S. and E.U.–is testimony to the ability of the food, advertising and media industries to disguise the true nature of things.

But now a viral video is making the rounds that, if it gains enough traction could well have repercussions on not only the food industry, but on international trade agreements and even the roots of neo-liberal capitalism itself.

In the video, shrimp producers are shown hard at work operating sophisticated machinery that has as many as 30 stations where workers take the shrimp that has been harvested and inject it with a clear jelly-like substance. The injection goo contains carboxymethyl cellulose or CMC, as well as gelatin and glucose.

The reason for this massive operation is of course money. The goo in question doesn’t appear to be radically different from the shrimp’s own body structure, and the additional heft given to each of the crustaceans will transform a kilo of shrimp into 1.15 to 1.2 kilos when it comes time to sell them to exporters. The producers also claim that the injections make the shrimp “look fresher.”

But this is the system there, and it is perfectly acceptable to the locals. As one worker put it, “Every day I buy around 30-50 kilograms of shrimp. After I inject the substances, I sell them to seafood export companies in Ca Mau, Vietnam.

“I have to do this,” he added, “because all the other shrimp suppliers do this.”

The facility owner says he buys the CMC his workers inject from China, as no doubt so do “…all the other shrimp suppliers.” This fact alone should raise red flags among those who value their lives and their health; China isn’t exactly known for having strict quality control standards on their food, let alone on chemicals.

And keep in mind too that CMC comes in three distinct grades: purified (food quality), technical grade and industrial.

And if you believe that Chinese wholesalers of the chemical blend are scrupulous enough to ensure that the CMC they sell to Vietnamese shrimp farmers is purified grade, then I have a bridge to sell you.

Imported shrimp are well-known to be among the dirtiest, least inspected food product to enter the food system of the U.S.–and it makes up over 90 percent of the shrimp available there. Now there’s yet another reason to flee screaming from this product, if you can’t be assured you’re buying an organic, clean version of it.

Beyond that, the implications this disgusting video has for the demand for profit and what people are willing to do, not to mention the dangers that open-door trade policies like the TPP directly pose to our health and well-being should all come under scrutiny as well.
###
http://www.organicandhealthy.org/2016/10/viral-video-shrimp-injected-with-pig.html